ConservativeBlog.org
Posted at 03:06h in Blog, Environment and Enterprise Institute by The National Center

The leader of a U.S. “green” charity, a Discovery Channel TV star, is on the lam.  Rod McGuirk of the Associated Press reports that the Washington state-based Sea Shepherd Conservation Society:

…which a U.S. federal court last month labeled ‘pirates,’ said [its leader, Paul] Watson, a 62-year-old Canadian, had left the fleet before it reached Australia for fear of arrest. 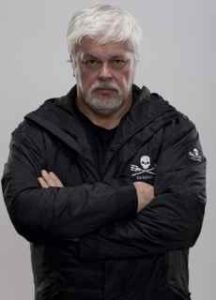 Watson is wanted for various crimes around the world:

…Interpol, the France-based international police organization, said on its website that Watson is wanted by Japan for ‘hooliganism/vandalism/damage, life and health.’ Watson is also wanted by Costa Rica for allegedly endangering a fishing vessel crew in 2002. He fled from Germany in July after being arrested at the behest of the Costa Rican government.

Watson’s made a career out of attacking those working within the law, while insisting they are breaking it. Illegal fishermen, illegal whalers, illegal sealers, illegal researchers, illegal loggers. The list goes on and on. Watson the vigilante, believes his actions are authorized by the United Nations’ “World Charter for Nature.”

I was the person who first thought up the tactic of tree spiking and as such I feel obligated to defend this child of my imagination.

What kind of a person defends tree spiking?

Paul Watson has a home and office in lovely Friday Harbor, a lucrative contract with Discovery Channel for his Whale Wars series plus tax-exempt “charitable” status sanctioned by the Internal Revenue Service (IRS).

…On setting out on his latest anti-whaling campaign in December, Watson said he was unlikely to return to the U.S. because American authorities would likely turn him over to Japan.

Never mind Japan.  Watson’s in violation of a U.S. federal court injunction ordering him to play safe at sea.  As I reported:

On February 26th, a large Sea Shepherd Conservation Society vessel placed itself squarely between a Japanese research vessel and its tender during an at-sea refueling.  Footage airing on Australian TV revealed how the dangerous stunt put all hands at risk in the Antarctic’s frigid Southern Ocean.

Wherever Watson goes now, that country has a duty to turn him over to U.S. law enforcement.

Is the IRS watching?  Because Paul Watson’s running out of countries.

Teresa Platt is the Director of the Environment and Enterprise Institute at the National Center for Public Policy Research.
Photo: Discovery Channel