ConservativeBlog.org
Posted at 01:47h in Articles, Blog by David Hogberg 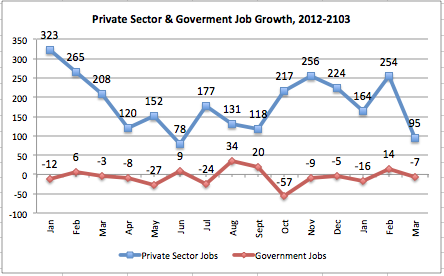 One explanation I had a hard time finding for last Friday’s job numbers was the January tax increase on job creators and capital.

Back in January, Obama and Congress agreed to a budget deal that included boosting income taxes from 35% to 39.5% for families making over $450,000 and single folks making over $400,000.  It also raised capital gains and dividend taxes for those groups from 15% to 20%.  And ObamaCare upped the Medicare payroll tax for families with incomes over $250,000, from 2.9% to 3.8%, in effect boosting the top marginal tax rate even higher on folks with money to invest.

That provides a potential explanation for the drop in jobs in March.  In March the U.S. economy created a total of 88,000 jobs, a drop from 268,000 in February.  The jobs created in January and February were probably already “baked in the cake” when those tax increases took effect.  But by March, top earners may have been moving their money out of more highly taxed productive activities and into areas where they can hide from the tax man.

Of course, that’s only one month of data supporting that theory—more months of data are needed before we know if the theory really holds water.

But look at the table above and you see some more supporting data.  It separates private sector jobs from government jobs going back to January 2012.  Government jobs declined by 7,000 in March.  However, that’s consistent with the pattern over the last year, with many months showing negative job creation in the government—indeed, on average, the government lost 6,300 jobs per month in 2012.  Whatever happened to government jobs in March can probably be traced back to factors in the previous year.

By contrast, the drop in private sector jobs in March is not consistent with the pattern over the last year, when the private sector added, on average, 189,000 jobs per month. Thus, what happened in March could be a blip or it could be the result of a new shock, like tax increases.  Again, we’ll need more months of jobs data to be sure. But it’s not too early to suggest it as an explanation.

The administration and itswatercarriers are already trying to blame this on the sequester, a ridiculous assertion since the sequester barely began in March.

Some are also blaming it on the 2-percentage point hike in the payroll tax that hit all workers in January, but Neil Irwin at the Washington Post dismissed that pretty handily:

Retailers shed 24,000 jobs, with the steepest losses among sellers of building materials and garden supplies and of clothing and clothing accessories. It makes sense that it would have taken two or three months for less cash in customers’ pockets to translate into retailers keeping fewer cashiers and sales clerks on staff. That said, consumer spending data and reports from retailers themselves has held up reasonably well in 2013 despite the payroll tax, so it’s hard to assign too much confidence the idea that the drop in retail jobs is a consequence of fiscal austerity as opposed to a routine statistical blip.

Unfortunately, Irwin is at a bit of a loss to explain what happened in March, other than to say that the jobs report “leaves us with this overarching conclusion: This economy isn’t as strong as we thought it was.”

More likely the explanation is the negative impact of the January tax increases on the job market took two or three months to take effect.  Now, it seems to be here.