ConservativeBlog.org
Posted at 01:42h in Articles, Blog by David Almasi 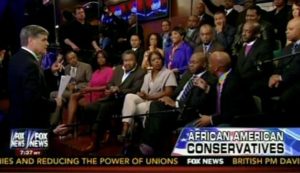 On a 4/8/13 special edition of the Fox News Channel’s “Hannity” program, a third of the studio audience, brought together to discuss the issue of liberal intolerance toward black conservatives, were members of the National Center’s Project 21 black leadership network.

The show was inspired by host Sean Hannity’s concern about the liberal hate campaign directed against famed neurosurgeon Dr. Ben Carson after Carson delivered a conservative address at the National Prayer Breakfast in front of President Barack Obama.  The primary topic of discussion was how black conservatives are singled out for abusive treatment as a means of shutting them up and keeping them out of political discourse.

Project 21 member Reginald Jones, who said he has received death threats because he is vocal about his conservative beliefs, said the “central point” about the left’s backlash against black conservatives is that they are a “threat to their sense of authority.”

According to Reginald, “liberals believe that they own black America.”  They want blacks to believe they are “downtrodden” and that they always be portrayed as disadvantaged.  They fear that a celebration of accomplishment outside of the civil rights movement, or the promotion of American exceptionalism and opportunity, creates a threat to liberal authority.

With Hannity concentrating on the derisive terms used against black conservatives, Project 21 member Archbishop Council Nedd II, the Presiding Bishop of the Episcopal Missionary Church, instead advocated ignoring liberal hate and concentrating on working for change.

Referring to scripture and the history of the life of Jesus, Council noted that Jesus, “focused on what he needed to do.”

Consequently, Council suggested: “All the names that people call me?… Fine… [L]et me focus on what I do.  Let me stay on my own message and do what I need to do.”

Hannity replied that he wants to expose an “institutional racism” against black conservatives that is being allowed by liberals at a time when the politically correct norms they enforce — if applied objectively — would not allow such behavior.

Stacy noted that conservatives should embrace efforts to repeal labor laws such as discriminatory project labor agreements and the Davis-Bacon Act, something he called “the lone remaining Jim Crow law in America,” as a way of showing blacks how conservatives are fighting for the well-being and opportunity.

Talking about the demonization of black conservatives by liberals, Project 21 member Kevin Martin said black conservatives need to “raise our voices and be heard.”  He said that being called ugly names because of his political beliefs is “a badge of dag-gone honor for me.”  Kevin pointed out: “If you call me an ‘Uncle Tom’ sellout, I know I’ve won the debate.”

A partial transcript and more video is available on the Fox Nation web site.