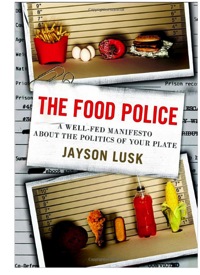 In a book review of Jayson Lusk’s “The Food Police” in today’s New York Post, I write,

Activists have spent hundreds of millions of taxpayer dollars to influence what food we eat, where we buy it and where it should be grown. But their trendy preferences clash with economic realities and the science of healthy eating.

Lusk is correct that “today, food policies are increasingly motivated by ideology” and “the fashionable agenda of a new food elite,” rather than whether the policies actually make us healthier.

Lusk properly blames celebrity chefs, activists, the popular press and politicians for being “the self-appointed saviors of our food system.” They say we sin by violating their commandments: “Thou shalt not eat at McDonald’s, buy eggs from chickens raised in cages, buy tomatoes from Mexico or feed your infant nonorganic baby food.

There can be no lack of faith in the elite’s dictates. There are no difficult trade-offs and no gray areas. Thou shalt sacrifice taste for nutrition, convenience for sustainability and low prices for social justice.”

A model program championed by food elitists is taking place in New York City, where Mayor Bloomberg’s Health Department distributes hundreds of thousands of dollars in “Health Bucks” vouchers. These new entitlements, given to city social-service nonprofits, may only be used at pricey farmers markets — not at produce sections of supermarkets, or heaven forbid, in the frozen-food section.

Although allowing voucher recipients to buy cheaper fruits and veggies in stores would increase the amount of produce purchased, the Health Department instead brags that the program “encourages shoppers to spend more of their monthly Food Stamp allotment on fresh produce from the [farmers] market.”

But programs like Health Bucks, Lusk argues, will likely worsen the nutritional problem it is meant to solve.

Farmers markets selling local produce are only useful in harvest months. The program purposefully diverts consumers from supermarkets and bodegas — which activists allege don’t supply quality and affordable produce now. Come winter, when the farmers markets are left with nothing but jelly and artesian breads, customers will be left in a jam; those that return to the supermarkets may find the bodgegas have largely abandoned vegetables — not able to compete with organic arugula the city provides gratis.

Across the Hudson, the New Jersey Department of Agriculture’s “Jersey Fresh” advertising campaign has spent an annual average of nearly $1 million of state and federal taxpayer money promoting locally grown food. The program is typical of government spending, which distorts decision-making by pushing locally grown produce at the expense of other convenient and affordable food. New Jersey residents should buy local produce when it tastes good and is priced right, not because there’s any intrinsic virtue to it being local.

Programs such as Health Bucks and Jersey Fresh embody the food elitism Lusk describes. “The conclusion that local food is healthier is a non sequitur,” he writes. And going green isn’t black and white. “It depends on what local food you eat, when you eat it and what you do with the extra time and money you don’t spend seeking out local products. In short, eating local has nothing to do with eating healthily.”

For example, explains Lusk, some produce is “most nutrient-rich immediately after being picked ripe. But large growers and processors often quickly freeze just-picked produce to preserve freshness. In fact, frozen vegetables are typically more nutrient-dense than fresh veggies that have been off the vine for several days.” So ironically, the vegetables in Lean Cuisine dinners that the food elite look down their noses at likely provide more nutrients than say, a government subsidized heirloom string bean from a chic Union Square Farmers Market.

And of course, low-calorie options in prepared dinners are convenient alternatives to high calorie fast-food fare. As food policy expert Julie Gunlock of the Independent Women’s Forum writes, “If the goal is to stay healthy, no one should deny that frozen vegetables are one of the best options. Yet because of the foodie culture which demands faithful adherence to the ‘fresh and local’ mantra, those most in need of affordable and undeniably healthy food are being discouraged from eating it.”