ConservativeBlog.org
Posted at 15:04h in Articles, Blog by David Hogberg

A bill with the Orwellian name “Marketplace Fairness Act” that imposes a sales tax on internet retailers looks like it is going to be passed by the Senate. 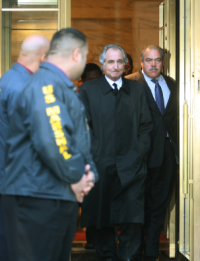 NEW YORK – JANUARY 5: Financier Bernard Madoff (2nd-R) walks out from Federal Court after a bail hearing in Manhattan January 5, 2009 in New York City. Madoff is accused of running a $50 billion Ponzi scheme through his investment company. Mr. Madoff is free on bail and hasn�t formally responded to the charges or entered a plea. (Photo by Hiroko Masuike/Getty Images)

As it wends its way through Congress, you’ll hear plenty of rhetoric like this:  The bill “will level the playing field for local small business retailers that are in competition every day with large out-of-state online companies,” said President Obama.

I believe that, don’t you?  Undoubtedly, the money collected will go to help local business lower their costs so they can better compete with online retailers.  You’ll see state and local government use the revenue from the internet tax to cut sales taxes and maybe even property taxes for local businesses.

The logical flaw in that argument, though, seems to be that state and local governments could do those things now without internet sales tax revenue.  So, why don’t they?  Well, that would mean those governments would get less revenue.  And governments are not about anything if they’re not about getting more revenue.

And that, of course, is the purpose of the internet sale tax.  As Sen Dick. Durbin (D-Ill) said, “What it means is a lot of money for states and localities.”  Kudos to Durbin for his honesty.

You can bet that the money will be spent on state and local politicians’ interests that help them get reelected, especially the salary, pensions and health care costs of government workers.  Local retailers will be lucky to see a dime of it.  Instead, they are being used in a scam to squeeze more money out of the taxpayers.  For more on this, here’s what I wrote about the internet sales tax at Investor’s Business Daily a few months back:

This is nothing short of a racket. To see this, one just has to examine how the tax is going to be collected. If, say, a person in Texas purchases an item online from a company in Rhode Island, the company has to compute the sales tax for Texas, apply it to the item, charge it to the customer as part of the price, and then remit the tax to the state of Texas. And the company in Rhode Island has to do this for every state.

That means retailers have to keep track of many different sales tax jurisdictions, a once near-Herculean task. But a website supporting the “Marketplace Fairness Act” actually makes a reasonable point. Because of computer technology, this is “no longer an insurmountable technical, administrative, or financial burden.” Well, it’s no longer an insurmountable burden. The cost the businesses have to pay for such technology is still a cost and, hence, a burden.

But here’s why it is a racket. If making the process simple is really the goal, then why not simply apply the sales tax where the online retailer is located? The company in Rhode Island would simply add the state’s 7% sales tax to all of its items, and the consumer would pay that every time he purchased something online from the company.

That’s the way it works now every time we take a trip to another state and make purchases there. When I go to Maryland, I pay the 6% Maryland sales tax on anything I buy there. The taxes go into the coffers of the state of Maryland. The businesses I buy from do not remit the sales taxes to Virginia, my state of residence.

Doing it that way would be much simpler and less costly than companies having to buy software that enables them to apply the sales tax in multiple states. Of course, that might force states to compete for the business of online retailers. Big online retailers would be inclined to locate in states like Delaware which has no sales tax. Or they would be inclined to locate in states with low sales taxes and regulations that were far more business friendly. Regardless, states would have to compete for online businesses, and governments generally like competition the way a vampire likes garlic.

So, the federal and state governments want to do it in a more convoluted way which, as governments will do, they call “simple.” Most importantly, doing it this way ensures that every state gets a cut of the boodle.

And once most state governments get their hands on this money, let the spending begin!

One of the funniest moments to come out of this entire boondoggle occurred when ex-Mississippi Gov. Haley Barbour took the the pages of NRO to promote it. Now flacking for the Retail Industry Leaders Association, Barbour claimed, “The Marketplace Fairness Act is something all conservatives should be proud to support.”

Sending more money to near-bankrupt states like California, New York and Illinois is something conservatives should be proud to support? What was Mr. Barbour sprinkling on his breakfast cereal?

Bernie Madoff scammed many people out of millions of dollars.  Congress is about to scam us out of billions.  The difference?  Madoff didn’t dress up his scam as a matter of “fairness” and helping “local business.”