ConservativeBlog.org
Posted at 11:18h in Blog, Health by David Hogberg

Over at the Washington Post, Sarah Kliff notes that the Independent Payment Advisory Board is out of the woods for now: 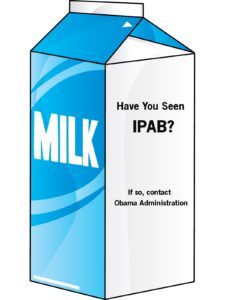 “IPAB would only come into effect when Medicare’s per-enrollee spending grew faster than the average of overall price growth…a few days ago, acting chief actuary Paul Spitalnic made his determination: Medicare cost growth would not be high enough to call the IPAB into action….And that’s the reason that, at least in its first year, the Independent Payment Advisory Board won’t be doing much at all. And it’s possible this could persist for a few years, as the the Center for Medicare and Medicaid Services projects relatively low growth in per-enrollee spending for the next few years.”

Well, that’s part of the reason.  The other part is that there is no IPAB because President Obama has failed to nominate anyone yet.  Interestingly, Kliff doesn’t mention that.

Nor does this completely end the non-existent IPAB’s responsibilities for now.  On January 15, 2014, it is supposed to release an advisory report to Congress on Medicare.  Chances are that deadline will be missed too.

According to my count, there are about 128 working days left in the Senate calendar for this year.  Probably enough time to hold hearings and confirmation votes on IPAB nominees, but the window is closing.  And, so far, there is no indication that President Obama is about to make the nominations.

If not this year, will he make the nominees in 2014?  Risk a major public relations fiasco during an election year? Yeah, right.

That means the soonest he’d make the nominees is 2015.  Which means that the non-existent IPAB will miss at least four deadlines:  The actuary’s analysis from last Tuesday which IPAB has already missed.  The next actuarial analysis on April 30, 2014.  And the two advisory opinions on Medicare, one on January 15, 2014 and the other on January 15, 2015.

As IPAB misses more and more of those deadlines, it will become obvious to all but the most dedicated ObamaCare partisans:  IPAB is unworkable.