ConservativeBlog.org
Posted at 06:49h in Blog, Health by David Hogberg 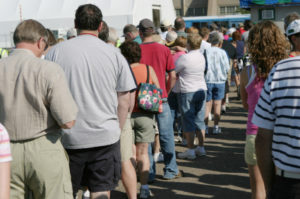 Over at the AARP, Dr. Aaron Carroll penned a missive purportedly debunking myths about about Canada’s health care system. One such myth is “Canada has long wait times because it has a single-payer system.”

The wait times that Canada might experience are not caused by its being a single-payer system.

Wait times aren’t like cancer. We know what causes wait times; we know how to fix them. Spend more money….

Please understand, the wait times could be overcome. Canadians could spend more. They don’t want to. We can choose to dislike wait times in principle, but they are a byproduct of Canada’s choice to be fiscally conservative.

Yes, they chose this. In a rational world, those who are concerned about health care costs and what they mean to the economy might respect that course of action. But instead, they attack the system.

For the moment, let’s accept Carroll’s argument that the problem with waiting times can be solved by spending more money.  Even if we accept that, though, it’s clear that Carroll is dodging a pretty obvious question:  Is there something about the nature of single-payer that results in not enough money being spent to alleviate wait times?  The answer to that is “yes.”

Under single-payer systems, the money to pay for care is part of the government’s budget.  Governments or, more precisely, politicians always face completing pressures on how to spend government revenue.  They can only spend so much on health care without taking away from resources for defense, welfare, and other government functions.  This dynamic will limit how much can be spent on health care.

Second, the budget for health care itself faces political pressures, and those pressures prevent the money from being spent more rationally, so that, say, more people who genuinely need operations don’t face wait times. Money could be redistributed away from other, less urgent areas of care to pay for more speedy surgeries.  So why doesn’t that happen?  John Goodman and Devon Herrick explain it best:

Why do single-payer health insurance schemes skimp on expensive services to the seriously ill while providing so many inexpensive services to those who are only marginally ill? Because the latter services benefit millions of people (read: millions of voters), while acute and intensive care services concentrate large amounts of money on a handful of patients (read: small number of voters). Democratic political pressures in this case dictate the redistribution of resources from the few to the many.

And is Carroll serious when he writes “In a rational world, those who are concerned about health care costs and what they mean to the economy” would respect the Canadians’ supposed decision to spend less?  “But instead,” writes Carroll, “they attack the system.”  Hmmm…is it really an irrational world when people criticize a system that leaves some of the sickest patients at the mercy of long wait times from treatment?

Next, Carroll displays his ignorance of America’s Medicare system:

Our single-payer system, which is called Medicare…manages not to have the “wait times” issue that Canada’s does. There must, therefore, be some other reason for the wait times. There is, of course.

Carroll then present a chart showing that America spends more on its health-care system than Canada’s spends on its system, the clear implication being that more spending means no wait times.

Alas, Medicare has its own “wait times”issues.  One might be called the “Wait Time For Medicare’s Second-Class Citizens, The Disabled.” To get on Medicare if you are disabled, you must first qualify for Social Security Disability Insurance. One you qualify for SSDI, the two-year wait period begins to get on Medicare.  At any give time, more than one-million people are on this waiting list.  This wait list has been in effect since Medicare added the disabled to the program in 1973.  Why hasn’t it been shortened?  Because the disabled don’t have sufficient political clout.

Medicare rations in other ways.  For example, until very recently if you were a Medicare beneficiary and needed physical, occupational or speech therapy to either maintain your level of physical and speech abilities or stem the decline of a disease, Medicare denied you access.  Therapy was only for people who showed improvement in their condition.  This harmed people who had strokes, multiple sclerosis, and dementia.  (I’ve written more about this policy and its consequences here.)  The only reason this was overturned was that a court stepped in and Medicare decided not to fight it.  Otherwise, it might never have changed as the people suffering from it are probably too sick to engage in the kind of activities—get-out-the-vote drives, protests, lobbying—necessary to chance public policy.

To sum up, rationing care occurs because governments face limits on their health-care budgets, and political pressures determine how those budgets are distributed.   And those phenomenon are inherent in any single-payer system.