ConservativeBlog.org
Posted at 05:08h in Blog, Health by David Hogberg 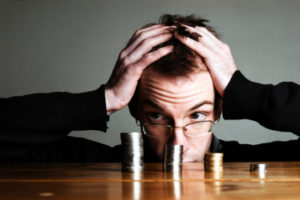 As I noted in a blog post about the DC Health Exchange last week, just because you are eligible for a premiums subsidy on the exchange doesn’t mean you will get one.

Today I look at the average premiums in California and—guess what?—the same holds true for the Golden State’s exchange, Covered California.  People earning between 133% of the federal poverty level (FPL) and 400% FPL are eligible for subsidies on the exchange.  But as the table below show, those age 40 earning 323% FPL ($37,122) or more, will be ineligible for a premium subsidy. The numbers are worse for those under age 40. 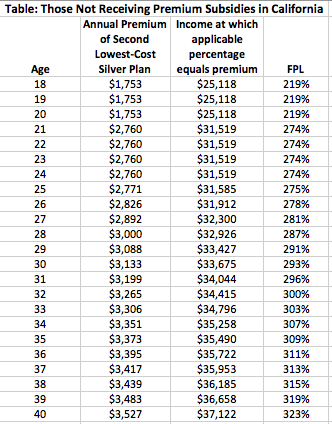 As to why this happens, it helps to understand the formula used to determine premium subsidies.  (It’s a bit technical, so bear with me.)

That is exactly the case with, say, the 25-year-old making $35,585 annually in California.  The second lowest-cost Silver Plan and his applicable percentage are the same, $2,771.  Thus, he receives no subsidy.

Ultimately this means that many relatively young and healthy people will be paying full-price for any plan on Covered California.  And since the price all of the plans are greater than the fines for not buying insurance ($95 in 2014, $395 in 2015, $695 in 2016 and beyond), the young and healthy will have a considerable financial incentive to not participate in the exchange.  And if that happens, well, see my recent paper, “California’s Coming Health Insurance Death Spiral.”