ConservativeBlog.org
Posted at 17:52h in Articles, Blog by David Hogberg

In the 1970s author John Fuller published a book entitled “We Almost Lost Detroit,” about the 1966 near meltdown of a nuclear reactor about 30 miles from the Motor City. 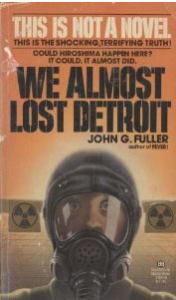 After Detroit’s declaration of bankruptcy (or, apparently, an unconstitutional bankruptcy), I couldn’t help engaging in a thought experiment.  What if the potential nightmare in Fuller’s book had come to fruition resulting in the complete evacuation of Detroit?

Furthermore, how many lives would be different today if Detroit had been abandoned?  Nearly half the adult population in Detroit is functionally illiterate.  How many of those people would be able to read now if they had grown up elsewhere?  For that matter, how many of the residents would not be on welfare, would have decent paying jobs, and would enjoy a much better quality of life if they had grown up elsewhere?

Surely, some people would never have grown into adulthood if the reactor had melted down, resulting in deaths from radiation poisoning and a likely mass panic to leave the city.  But how many murders have taken place in Detroit since 1966?  I’ll bet that the latter would easily exceed the former.

In the end, it’s better that Detroit still has residents and, with them, some hope of turning things around.  But the fact that it’s so easy to do such a thought experiment suggests that hope must be pretty small.