“We issue no holding on §5 itself, only on the coverage formula.”

So wrote U.S. Supreme Court Chief Justice John Roberts in the Court’s recent decision in Shelby County v. Holder, striking down the coverage formula in Section 4 of the 1965 Voting Rights Act.  That provision previously required certain states and jurisdictions – selected based on past racial discrimination – to undergo extra-constitutional review by either the Justice Department or a federal court whenever they sought to do anything that might have affected the voting process.  The Court ruled that the coverage formula was outdated and unconstitutionally punished states, in violation of equal sovereignty, for actions more than 50-years old.

Most conservatives cheered the decision, while sky-is-falling liberals bemoaned the death of the Voting Rights Act.  Neither side got it totally right.

At the time, some of my colleagues called me pessimistic (and they were probably right to a degree), but I was one conservative lawyer who was furious with Robert’s Shelby County opinion.

Roberts did not make a grand legal pronouncement; he committed an act of judicial minimalism – something that is becoming a disturbing hallmark of his tenure as Chief Justice.

In the case, the lawyers for Shelby County, Alabama primarily argued that preclearance itself – Section 5 of the Voting Rights Act – should be deemed unconstitutional.  Since the 1960s, under preclearance, all or part of 15 states were required to petition the federal government for approval to any change in their voting laws no matter how minuscule.  Shelby County issued a direct facial challenge to Section 5.  In their brief, they explained that:

In 1965, “Congress had found that case-by-case litigation was inadequate to combat widespread and persistent discrimination in voting, because of the inordinate amount of time and energy required to overcome the obstructionist tactics invariably encountered in these lawsuits.”  Katzenbach, 383 U.S. at 328 (emphasis added).  Absent similar evidence in the 2006 legislative record, or at least evidence of discrimination in covered jurisdictions “so extensive that elimination of it through case-by-case enforcement would be impossible,” Nw. Austin, 557 U.S. at 225 (Thomas, J.), there is no basis for upholding Section 5.  If the efficient prevention of isolated violations could sustain the invasive preclearance obligation, then Section 5 would be a constitutional remedy even where the legislative record documents the existence of minimal voting discrimination. Such a result cannot be reconciled with Katzenbach or any other decision.

They further explained why the lower court’s vote to uphold Section 5 was in error:

Under the lower court’s constitutional reasoning, preclearance could be imposed to counteract any perceived threat of Fourteenth or Fifteenth Amendment violation given the lure of prior restraint.  Instead of creating a right of action to remedy discrimination against the disabled in accessing judicial services, Lane, 541 U.S. at 517, or against women in the workplace, Nev. Dep’t of Human Res. v. Hibbs, 538 U.S. 721, 724 (2003), Congress could suspend the right of state and local governments to make physical changes to their facilities or make changes to their employee leave policies “until they have been precleared by federal authorities in Washington, D.C,” Nw. Austin, 557 U.S. at 202.  But Katzenbach teaches that an unprecedented preclearance remedy requires evidence of systematic violations not remediable by less restrictive means.  Federalism interests cannot be trampled solely in the interest of an efficient remedy.

In other words, since Congress did not properly evaluate the racial conditions when it reauthorized the Voting Rights Act in 2006, and ample record evidence showed that preclearance had long outlived its temporary, extra-constitutional usefulness, the High Court was the proper venue to strike Section 5 and return the states to equal footing under the equal sovereignty doctrine.

Roberts obviously had other ideas.

Instead of ruling on the constitutional matter squarely before him, Roberts simply ruled that Section 4’s coverage formula was outdated.  Note that he didn’t even rule that Section 4 itself was unconstitutional.  Congress is free to reevaluate states and jurisdictions whenever it wishes, develop a new Section 4 formula, and place a whole new crop of regions under Section 5’s preclearance regime.  While the current makeup of Congress makes this unlikely in the immediate future, one only has to look back at the composition of the legislative and executive branches in 2008 and 2009 for a reminder of what pure progressive power can accomplish in short order.

It is well known that Roberts doesn’t want the Court to be seen as a political body.  Many feel that this is the reason he found such a convoluted way in which he uphold ObamaCare (striking the congressional power grab under the Commerce Clause, but upholding the law under the taxing power).  But beyond trying to avoid politics, close observation shows that the Court under Roberts has a pattern of so-called judicial minimalism – a legal theory that he praised during his confirmation hearings.

In short, judicial minimalists decide cases on narrow, one-time circumstances so as to not offend stare decisis (respecting judicial precedent).

Likewise, in Hollingsworth v. Perry, the recent case challenging the constitutionality of California’s Proposition 8 which defined marriage as between one man and one woman, the Court simply dismissed the case for lack of standing and made no ruling on the merits (a decision which I believe is legally correct, but further highlights the Court’s minimalist approach under Roberts).

Shelby County is just another paradigm in this progeny.

At his U.S. Senate confirmation hearings in 2005, Roberts championed this concept of judicial minimalism – noting that his job is to be an umpire – “to call balls and strikes and not to pitch or bat.”  Too often though, Roberts appears to be playing football or basketball, and not baseball.

Robert’s remarks from his Senate hearing have not always translated well during his time on the bench.  In Shelby County, he was asked by the plaintiffs to make a ruling as to whether Section 5 of the 1965 Voting Rights Act was still constitutional in 2013.  That was his job, but he didn’t want to call a ball or a strike.  He looked at the issue before him and decided that a field goal went wide left. 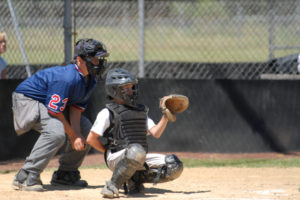 Under the political question doctrine, judges sometimes demur on legal or policy questions that are really moreChief Justice Roberts asks the catcher: “What game is this again?” of legislative issues.  That is appropriate.  But what is our tripartite government to do when the Chief Justice of the Supreme Court seems content to consistently shirk his primary responsibility?

In the Shelby County aftermath, the executive branch has continued to lord its excessive powers under the Voting Rights Act – exactly what I feared when the case was decided.

Shortly after the decision, Attorney General Eric Holder petitioned a federal court to require Texas to remain under preclearance standards as it was prior to the few days respite after the Shelby County decision was released.  Expect Holder to take similar action against many more states – perhaps even states not previously covered under Section 4.

Once a governmental body grabs power, it is nearly impossible to take it back.  And Attorney General Eric Holder is playing hardball.  He has worked hard to perpetuate the notion that America is still a racist nation which is hostile to blacks – and he is not going to let the Shelby County decision get in his way of running the Department of Justice based on that judgment.

Since Roberts refused to rule on Section 5’s preclearance provision, Holder is using the so-called “bail-in” provision of Section 3 to try and put Texas back under the thumb of the Department of Justice – requiring it to preclear any future voting changes with federal officials – for at least another decade.

Under Section 4, it was the state’s duty to prove that any change they sought in voting rules was not discriminatory.  Under Section 3, the Justice Department must convince a judge that a state has engaged in recent intentional discrimination in order to place that jurisdiction under federal preclearance control.

That is the only difference from the pre-Shelby County era; which party must prove/disprove discrimination.  And it will likely be easier for Holder to “prove” intentional racial discrimination – at least in the eyes of progressive judges – than one might think.

Consider all the states that have enacted, or are working to enact, voter ID laws.  In the last few years, more than 30 states have introduced some form of voter identification law.  Liberal legal leaders such as Rick Hasen and Attorney General Holder view voter identification laws as ipso facto evidence of racial discrimination.  In fact, Holder is relying on past litigation addressing, in part, Texas’s voter ID efforts as proof of recent intentional discrimination.

Starting his Section 3 bail-in march in Texas, it is easy to conceive that Holder will traverse the countryside, declaring every state that dares place an ID requirement on voting to be racist.  This would dramatically increase federal power over voting – and liberals claimed that Roberts gutted the Voting Rights Act.

The current litigation in Texas, and the likely litigation in other voter ID states, could have all been avoided if Chief Justice Roberts had simply called a ball or a strike and struck out the outdated preclearance provisions of the Voting Rights Act.  After all, that’s how he once described the job he now holds.

Let’s just hope the next time the Supreme Court considers a facial challenge to the Voting Rights Act, perhaps a challenge to his own decision in Shelby County and how the Obama Administration responded, Roberts remembers his pledge to be an umpire.  Someone has to take the bat out of Attorney General Holder’s race-obsessed hands.