ConservativeBlog.org
Posted at 16:03h in Blog, Health by David Hogberg

I got into a Twitter debate the other day with The New Republic’s Jonathan Cohn over whether the problems in Britain’s health care system are due to the nature of its single-payer system or the amount the government spends on its system.  In other words, are the problems, such as long wait times for surgery, caused by “how they pay” for health care or “how much they pay”?

Cohn contended that it was due to the fact that Britain spends only about 8.7% of GDP on health care; the reason we don’t have much in the way of Britain’s problems in the U.S. is that we spend 16%.  (The numbers we used were a bit out of date.  As of 2011, health care accounts for about 17.9% of our GDP and 9.3% of Britain’s.  Nevertheless, Cohn’s point still stands.)

I contend that Britain’s problems are due to the way it allocates its health care resources—namely, its government-run, single-payer system.  In the course of the debate, I asked Cohn if he thought a single-payer system would allocate 16% of GDP as well as a market system (which, just for the record, we don’t have here in the U.S.).  Cohn’s response: 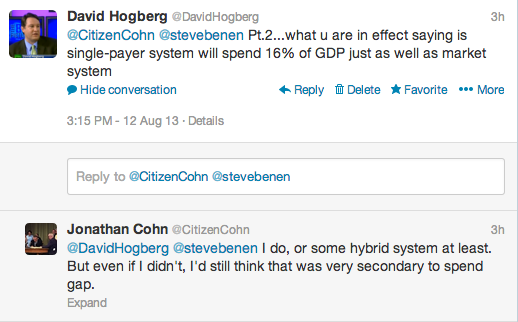 I think Cohn is going to have a hard time finding much evidence that a government system will allocate 16% of GDP—or any amount of GDP—more efficiently than a market system.  Good luck with that.

Then Cohn flipped the question, asking me if I thought “there’d be same access issues in UK if they spent 16% GDP like we do?”  I replied, “Yes. Govt can mismanage 16% of GDP just as well as it can 8.7%.”

I also pointed out that Canada, which also has a single-payer system, has many of the same problems, such as waiting times for surgery, as Britain and spends more GDP on health care than does the Britain.  Cohn replied that Canada still spends less than the U.S.

Good point, but we can compare Canada with some nations other than the U.S. to shed some light on the how we pay vs. how much we pay controversy.  Specifically, let’s compare Canada with three nations that don’t have single-payer systems and don’t have much of a problem, if any, with waiting times for surgery: France, the Netherlands, and Switzerland.

(Note: Netherlands had a problem with waiting times for surgery in the 1990s, but that problem declined considerably in the next decade—after it changed how it paid for health care.  See chapter 10 of this report.)

Anyway, here is what Canada, France, the Netherlands, and Switzerland spent on health care in 2011 (source: World Bank.) 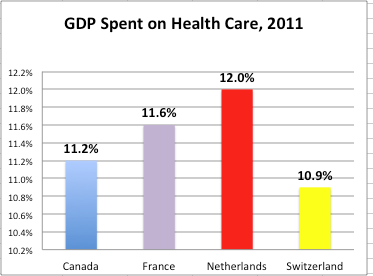 All of these nations are pretty close to each other in terms of the GDP that is spent on health care.  Indeed, if one is to cling tenaciously to the “how much” theory of spending, he’d have to argue that the point at which waiting lists are no longer a problem exists somewhere between Canada’s 11.2% of GDP and France’s 11.6%.

But even that wouldn’t hold much water as he’d still have to explain why Switzerland spends slightly less than Canada but apparently has no serious problem with waiting times.  So, score one for the “how we pay” theory over the “how much we pay” theory.

Oh, and by the way, I didn’t get the idea to compare Canada to France, the Netherlands, and Switzerland at random.  I got it from Cohn: 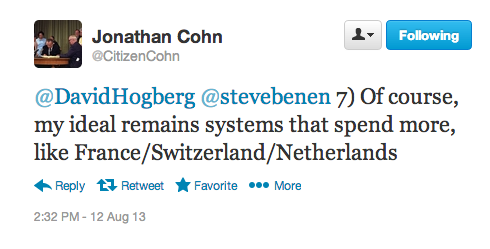 UPDATE:  Looking at the OECD report on wait times, I decided to examine the GDP spent on health care of some of the nations listed as having no serious problem with wait times (see page 25 of the report.)  Here is another comparison: 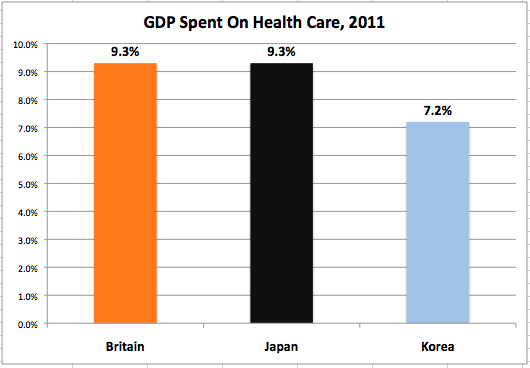 Well, Japan shows it is possible to spend just as much as Britain without the problems of wait times for surgery, whereas South Korea apparently shows that it is possible to spend even less.  Now, both Japan and Korea have considerable government funding of their health care system, but both also have fairly extensive systems of private insurance, unlike Britain.  So, score 2 for the “how we pay” theory over “how much we pay.”