ConservativeBlog.org
Posted at 13:05h in Blog, Health by David Hogberg

Medicare’s program for paying for “DME”—sometimes called DMEPOS for Durable Medical Equipment, Prosthetics, Orthotics, and Supplies—is turning into disaster.  The legislation that created Medicare Part D also established a competitive bidding program for DMEPOS.  And if you listen to suppliers and consumers, there are a lot of complaints.

But according to MedPage Today, the “Centers for Medicare and Medicaid Services (CMS) says the competitive bidding program is running smoothly and saving money.”  In other words, the “Frank Drebin” approach:

On the other side, “Medical device companies and certain providers call it a mishandled program that cuts reimbursements, lacks transparency, and hurts patient access and quality of care.”  In fact, 9% of DMEPOS companies that received winning contracts under the program declined them.

So, let’s say companies A through G made a bid to provide a particular medical supply at a per-unit price, represented in the graph below.  CMS then decided that companies A through E would provide enough supply.  So it accepts the bids from A through E and—this is crucial—pays all of the companies what it pays company E, the highest bid accepted. 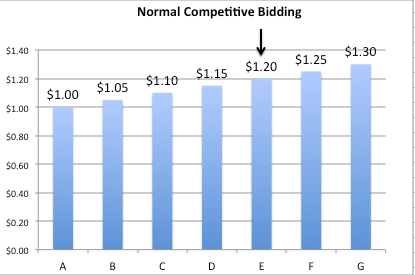 But that’s not how CMS runs its DME competitive bidding program.  Rather, it decides how much supply it needs, accepts enough bids to cover the supply, and then awards every winning company the median bid.  In other words, everything would remain the same in the above scenario except that now companies A thru E would be paid the price bid by Company C: 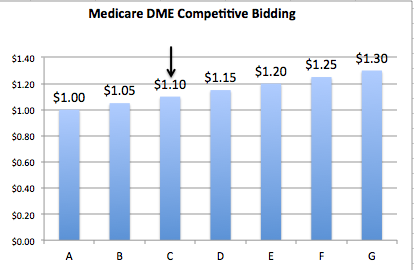 It isn’t too hard to see the incentives faced by companies D and E under the Medicare competitive bidding program.  If the price paid for C doesn’t cover their costs, they are likely to drop out of the program.  And if they drop out, then Medicare is going to come up short in meeting the supply of DMEPOS needed by Medicare beneficiaries.

If you want to understand more about the problems with this program, read the letter sent to then Health Subcommittee Chairman Pete Stark from “economists, computer scientists and engineers with expertise in the theory and practice of auctions” in September 2010. (A similar letter was later sent to the Obama Administration.)