ConservativeBlog.org
Posted at 12:56h in Blog, Health by David Hogberg

Well, another leftist has missed the point of my recent study, “Why The ‘Young Invincibles’ Won’t Participate In The ObamaCare Exchanges and Why It Matters.”  This time it’s Joshua Holland at Bill Moyer’s “Connecting the Dots”:

…the reality is that, after this year, you’ll only be able to enroll in the exchanges for a brief period in October and December. There are a few exceptions, like if you lose a job in the middle of the year, but as Adrianna McIntyre remarked, “I accidentally burned my Obamacare card” isn’t one of them.

David Hogberg, author of the NCPPR study says that’s not a problem. “A young person who gets a serious illness in June only has to wait until October to sign up for insurance and then wait until January 1 of the next year to receive coverage,” he writes. But you can’t exactly let a cancer metastasize for a few months or leave a bad injury untreated. And what about someone who gets that serious illness the day after the open enrollment period ends?

Alas, never underestimate the ability of the left to take something out of context.  What I was describing in that quote was a regulation known as “guaranteed issue.”  As I wrote in the previous paragraph of my study,  guaranteed issue (along with “community rating”) “give young and healthy people big incentives to forgo insurance coverage altogether.”  As I wrote just a few paragraphs prior, if the exchanges don’t attract enough young people, “they will eventually enter an insurance ‘death spiral.’”  It’s pretty clear that I think it is a problem.

I had previous experience with this when Jonathan Bernstein of the Washington Post accused me of ignoring the benefits of insurance and Brian Beutler of Salon accused me (indirectly) of encouraging young people to not purchase insurance. (Both wrong, see here.)  Although I didn’t see it until yesterday, Steve Benen at Rachel Maddow’s Blog did something similar.

So, what gives?  Are these pundits really missing the point of my study?  Maybe, but a better explanation comes from reading Holland’s full post, in which he states that the “hard-right is taking a scorched-earth approach, obstructing the law’s implementation by any means necessary” and “the right’s war on ObamaCare is reaching such a fevered pitch.”  In other words, Holland’s viewing just about anything related to ObamaCare, including the exchanges, through the lens of “how conservatives are working to undermine the law.”

One can also see this perspective in past posts of both Benen and Bernstein.  Indeed, it goes a long way to explaining why they misunderstand—if not outright distort—my study.  They view it as another conservative attempt to undermine the exchanges rather than an examination of the exchanges’ flaws. 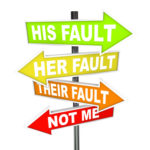 This perspective serves another purpose, that of providing a scapegoat for the left should the exchanges turn into a disaster.

One group that has really got the left’s dander up is the Citizens’ Council for Health Freedom.  CCHF is pushing a “Refuse to Enroll” campaign that encourages people to refuse to buy insurance on the exchanges.  While I don’t think this is a good tactic, either morally or strategically, I suspect its impact will be small.  Millions are apparently unaware of the subsidies offered on the exchange or how ObamaCare will effect them, according to CNN.  Many more than that are surely unaware of CCHF’s campaign, limiting its effectiveness.  Nevertheless, Holland, Benen, et al, are hyping up CCHF’s efforts, no doubt so that they can blame CCHF and other conservatives should young people fail to sign up for the exchanges.

If millions of young people fail to sign up for the exchanges it will be because (and this was the point of my study) of the incentives that the exchanges create for them.  While the campaign from a conservative organization will have probably marginal impact at best, it will provide the left with a convenient scapegoat for ObamaCare’s failures.