ConservativeBlog.org
Posted at 12:47h in Articles, Blog by Amy Ridenour 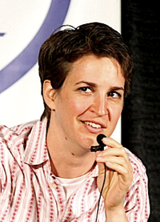 I don’t watch Rachel Maddow much, but when I do, I am always amazed at how few minutes it takes before I hear her make a baldfaced lie.

Today I heard her say this on her August 16, 2013 broadcast (text from MSNBC transcript, with spelling corrected):

This is Viviette Applewhite. She was 92 years old when she started fighting the state of Pennsylvania for her right to vote. Republicans in that state passed a new law last year that would block you from voting unless you showed documentation that you’ve never had to show before and that hundreds of thousands of legal voters in the state do not have, including Viviette Applewhite.

Tell it to the Philadelphia Inquirer, Rachel, which accompanied Mrs. Applewhite exactly one year to the day before your broadcast, and watched Mrs. Applewhite apply for and easily and immediately receive the required Pennsylvania ID.

The Inquirer further reported that there was no indication the Pennsylvania state employees had any idea Mrs. Applewhite was a plaintiff in an ACLU lawsuit claiming she cannot get an ID, saying, “an Inquirer reporter who accompanied Applewhite to the PennDot center on Cheltenham Avenue in [Philadelphia]’s West Oak Lane section saw no sign that the clerk recognized her or realized she was a major figure in the battle over the law.”

In the August 16, 2013 broadcast, Maddow crowed about Applewhite’s “victory” in the lawsuit, about which which the Inquirer described in 2012: “[it] claims the law would bar [Applewhite] from exercising the voting rights she’s enjoyed for more than half a century…”

But, as the Inquirer pointed out in 2012, the ease with which Mrs. Applewhite got an ID made the need for a lawsuit, even then, questionable.

By the time of Maddow’s August 2013 broadcast, it was even more questionable, as Mrs. Applewhite had had her photo ID for a full year by then.

Despite what Rachel Maddow told her audience.