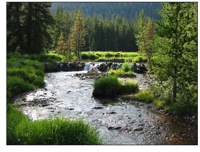 Writing in the American Spectator, Senior Fellow R.J. Smith has written an excellent rebuttal to a rather odd press release by the R Street Institute calling for the federal government to further expand federal land conservation programs.

Reagan, of course, was fallible (see below for more on his true record in this area), and even if he wasn’t, the federal government owns far more land now than it did thirty years ago. It’s illogical to assume that even if every land purchase Reagan approved was perfect back then, that more land needs to be purchased now.

And the point about royalties is, if anything, more silly. Royalties paid to the federal government are federal resources. If they finance something new, such as land acquisition, either something else in the federal budget has to be cut, the country has to go deeper in debt or taxes have to be raised. Even if they don’t finance something new, but consistently finance further land acquisition, they are resources that could be used for other purposes — purposes the taxpayers may be financing now.

Royalties are not magic money.

R.J. Smith, who wrote the article in his capacity as distinguished fellow at the Competitive Enterprise Institute, where he also hangs his hat, makes numerous points:

It is one thing for the R Street Institute to argue for an expansion of the federal government, as it is entitled to its own opinions, but it is quite another for it to do so claiming this is a conservative principle. It simply isn’t.

Addendum, 9/11/13: David Ridenour weighs in on the debate with some pretty solid evidence from Steve Hanke about what Reagan’s views really were.