ConservativeBlog.org
Posted at 10:58h in Blog, Health by Amy Ridenour

Just two days ago I did a short post showing that Think Progress fibbed when it claimed a Duke University survey of business executives “undermin[ed] conservative critics who’ve argued that the health care law would hamper business growth and expansion.”

I guess I should have ended the piece with “go and sin no more,” because Think Progress didn’t get the message. Tonight it touted the same story we took apart on Wednesday, but this time with an extra layer of falsehood: a teaser (see screen grab below) falsely claiming the survey shows “how ObamaCare will actually promote job growth.”

In fact, the survey found that 38 percent of the corporate chief financial officers polled by Duke University said their firm was doing less full-time hiring because of ObamaCare. Nothing in the survey provided evidence that ObamaCare is promoting job growth.

No need to take my word for it. Read Duke’s press release here, or watch the professor who runs the survey discuss the survey’s findings here. 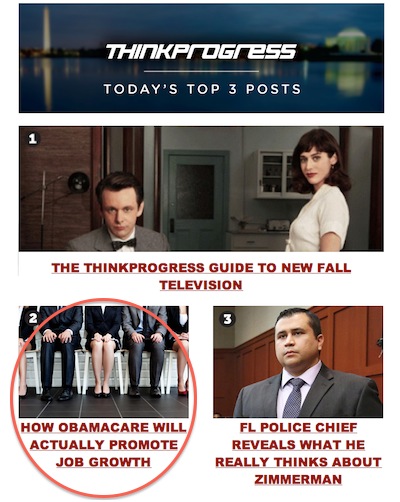 Find some of our other posts about Think Progress’s creativity by clicking here.