ConservativeBlog.org
Posted at 09:04h in Articles, Blog by Amy Ridenour 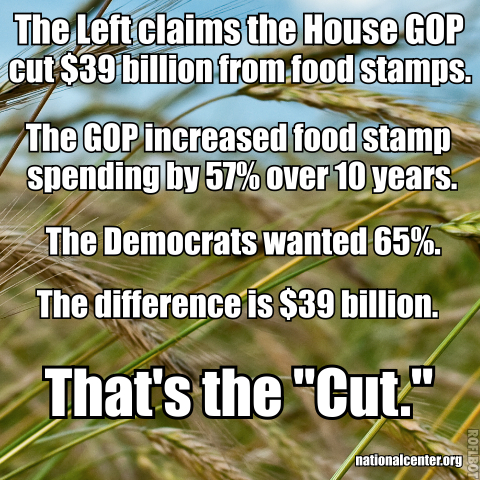 If you listen to the left, you’re probably hearing about food stamp “cuts.”

“The U.S. House of Representatives debated a bill to slash food stamps by some $40 billion dollars over the next decade.” – Judy Woodruff, PBS NewsHour, 9/19/13

“I want to know why the Republican Party thinks it is morally OK to strip millions of Americans of food stamps. How can anyone be okay with themselves attacking the poor? Tomorrow the House votes on Congressman Eric Canter’s bill to gut food stamp programs. It would gut $39 billion dollars from the program over ten years…” – Al Sharpton on MSNBC’s PoliticsNation, 9/18/13

“Explain to me why this vote today was not morally monstrous.” – MSNBC’s Chris Hayes to Mattie Duppler of Americans for Tax Reform, MSNBC, 9/19/13

“Even some conservative pundits worry that the war on food stamps… is bad for the GOP, because it makes Republicans look like meanspirited class warriors. Indeed it does. And that’s because they are.” – Paul Krugman, New York Times, 9/22/13

What you’re probably not hearing is, as Ira Stoll reported in the New York Sun, that the Democrats wanted to increase food stamp spending by 65% over the next ten years but Republicans passed a bill to raise it by only 57%, so partisan spinners and liberals in the media are calling what the GOP passed “a cut.” Here’s how left-wing activists arrive at the figure of $39 billion. The dollar figure of what the Democrats wanted to spend over ten years is $764 billion, but the Republican-led Congress passed a bill that spends $725 billion.The difference is $39 billion, and that’s the “cut.”

Or that food stamp spending increased under Obama from $39 billion in 2008 to $85 billion in 2012, and it doubled during the George W. Bush Administration, as reported by Katherine Rosario of the Heritage Foundation.

Or that, as Robert Rector and Amy Payne of Heritage have written, “If converted to cash, means-tested welfare spending is more than five times the amount needed to eliminate all poverty in the United States,” so the amount of money we’re spending isn’t really the issue, it’s how we’re spending it.

Or that some liberals want increased food stamp spending because they think it is a “stimulus” that will help get Obama’s economy going (never mind that the government has to take money from the private sector in order to “give” it to the private sector as a “stimulus,” so why we’re supposed to believe this actually would work is not precisely clear). Even if the left’s dubious economic theory is correct, the $39 billion difference between the Democrat and Republican food stamp spending increase proposals isn’t big enough to be a proper stimulus, according to what the left is always telling us.

The left is also not telling you are very important fact: No law-abiding American who meets income and asset tests, and, if they are not responsible for any dependents, is willing to work, do volunteer work or job training, will lose their food stamps under the legislation the House passed.

There’s a lot of misinformation out there about the way the GOP-backed legislation affects eligibility for food stamps as well.

In a nutshell, new provisions in the legislation:

The left keeps claiming that four million people could lose their food stamps under the legislation, but despite what some claim, that doesn’t mean children or disabled folks will lose out. People who don’t want to work, do job training, aren’t Americans, have money already or don’t bother to apply for food stamps are the ones who could lose out.

When Congress is fighting over whether to expand food stamp spending by 57% or by 65%, it’s clear “cutting” is not what’s going on.