ConservativeBlog.org
Posted at 08:54h in Blog, Health by David Hogberg

Today the Department of Health and Human Services released premium data on the 36 federal exchanges.  The data largely confirms what was found in our recent study, “ObamaCare Exchanges: Just Because You Are Eligible For A Subsidy Doesn’t Mean You Will Qualify.”

First, our study found that many “Young Invincibles”—those ages 18-34—will not be receiving a subsidy for their insurance from the exchange despite having incomes below 400% of the federal poverty level (FPL) or $45,960 annually.  Second, we found that in most states subsidies will extend up to 400% FPL for those age 52 and older.  Let’s examine each of those findings in light of the federal data.

Of the 15 exchanges we examined in the study, none had subsidies extending to 400% FPL for anyone age 34 or younger who is single and without children.  In eleven of the exchanges, subsidies stopped before 300% FPL ($34,470).

The federal data shows that in only one state, Wyoming, do subsidies extend to 400% FPL for anyone age 34 or younger.  In 23 of the state exchanges, subsidies stopped before 300% FPL for those ages 18-34: Alabama, Arizona, Florida, Georgia, Iowa, Idaho, Illinois, Kansas, Michigan, Missouri, Montana, Nebraska, New Mexico, North Dakota, Ohio, Oklahoma, Pennsylvania, South Carolina, Tennessee, Texas, Utah, Virginia, and West Virginia.  (Note:  Full results for all 36 states will be posted in a PDF file later.)

The table below shows the 13 states in which the subsidies did extend beyond 300% FPL for those age 34.  As the table shows, some of those states are still very close to the 300% level. 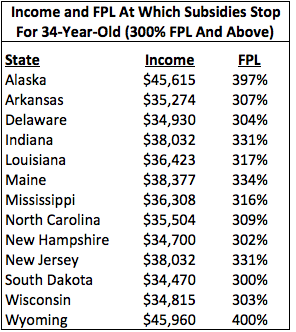 The subsidy picture looks much better for people that are over 50.  Our study found that in 12 state exchanges subsidies  extended to 400% FPL no later than age 52.  The federal data shows that to be the case in 27 states.  The table below shows the 11 states in which the subsidies extend to 400% FPL at ages older than 52.  Note that the latest is Tennessee (age 57.) 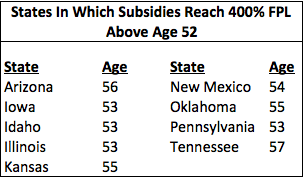 As we noted in our study, “With a subsidy structure that makes insurance less attractive to the young and healthy but quite attractive to those who are older and sicker, the ObamaCare exchanges are likely headed for an insurance “death spiral.”  The federal data bolsters that claim.