ConservativeBlog.org
Posted at 08:42h in Blog, Health by David Hogberg

As I noted the other day, the Department of Health and Human Services released premium data for the federal exchanges, and an analysis of the data largely confirmed an National Center for Public Policy Research study showing younger people were less likely to receive subsidies on the exchanges.

Here’s a few updates.  First, we now have a PDF file titled “Income At Which Premium Subsidies Disappear on the Federal Exchanges.”  It includes data for all 36 federal exchanges for every age between 18-64.  For those of you who don’t want to wade through all of that, a summary table showing the results for three age groups is included below.

A few other thoughts:  First, in the NCPPR study we found that the subsidy picture didn’t look that good even for people in their mid-40s.  The federal data continue that trend.  In only five exchanges—Alaska, Indiana, Maine, Mississippi and Wyoming—do the subsidies extend to the 400% federal poverty level (FPL) for anyone at age 45.  One other, New Jersey, comes close.

Finally, in our study we relayed the story of 27-year-old Preston “Mark” Cohen, a Chicago, Illinois resident.  He makes about $45,000 annually.  We didn’t have Illinois data at the time so we couldn’t be sure that Mark wouldn’t qualify for a subsidy—although given that he’s young and his income was very close to 400% FPL, we guessed he wouldn’t.  The Illinois data was included in the HHS release and, well, Mark is out of luck.  As you can see here, subsidies stop for a 27-year-old in Illinois at about 247% FPL, or $28,380 for a single person.  Sorry, Mark. 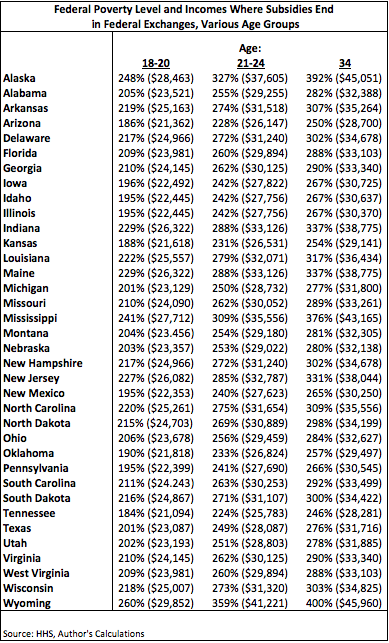