ConservativeBlog.org
Posted at 05:21h in Blog, Health by David Hogberg

The opponents of ObamaCare must have been the ones setting up the exchange websites.  Reasons such as incompetence or arrogance just aren’t sufficient explanations for things going this badly.  I’d hate to be the advisor who has to be the one to tell President Obama all that went wrong—although I’d love to be a fly on the wall during that conversation.

You know things have gone very wrong when clips like this are showing up on MSNBC (Hattip: Weasel Zippers):

What follows are screen shots I have taken from various exchanges at different times in the day.

This is what I first encountered on the Federal Exchange:

After about fifteen minutes it finally let me set up an account.  I then arrived at this screen.  I’ll just say I have no idea what the security questions are since clicking on them proved fruitless:

At the California Exchange I got to the first page of the website, where I selected “Apply.”  It didn’t go well after that:

After the ObamaCare supporters talked about how great the exchanges were going to be, you would think they would be prepared for lots of people signing up—i.e., lots of web traffic.  Apparently, Colorado was not:

The CEO of the Connecticut Exhchange said he was “confident there will be glitches.”  His confidence was well-founded:

To be fair to the Minnesota Exchange, it is still only two-and-a-half hours into the afternoon there (as of this writing):

Apparently applying for insurance on the Nevada exchange is an “unresolvable error.”

The Washington State Exchange’s webiste didn’t come up on my Safari or Firefox browsers either.  Not sure about Explorer: 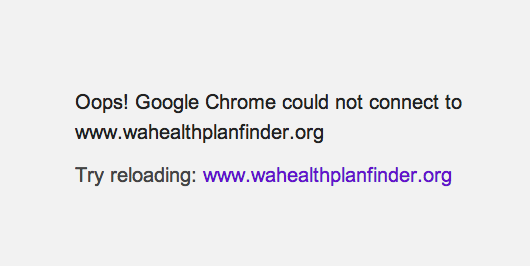