02 Oct 2013 The Smithsonian Has a Billion Dollars, So Why Is It Closed?

ConservativeBlog.org
Posted at 05:09h in Articles, Blog by David Ridenour 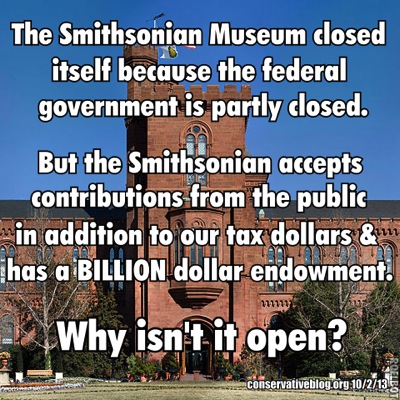 Yes, it gets a substantial amount of funding from the federal government.

But it also got nearly $150 million last year from other sources and had a surplus last year of not much less than that.

In addition, it has an endowment of nearly a billion dollars.

I guess the Smithsonian management couldn’t figure out a way to stay open a few days.