ConservativeBlog.org
Posted at 05:06h in Blog, Health by David Hogberg 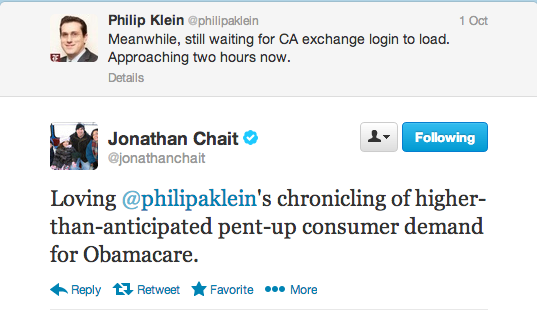 Is the difficulty logging in due to loads of people who want insurance?  Megan McArdle has some doubts.

For the sake of argument, though, let’s assume that it is related to “pent-up consumer demand.”  Demand is not “fixed.”  It will grow or decline depending on the cost of the product or service that is being demanded.  Raise the costs of obtaining a product and demand will decline.  Website glitches add to the cost—time, frustration, etc.—of getting insurance.  The longer those glitches continue, the more demand will wither.

The biggest problem for the exchanges is that the glitches will reduce demand most among the young and healthy. As I noted in an article in the American Spectator yesterday:

As I’ve explained at length elsewhere, two laws that govern the exchanges, “community rating” and “guaranteed issue,” will be the driving forces of the death spiral. However, technology glitches will exacerbate it.

Among those eligible for the exchange, those ages 18-34 are probably the most web savvy. Thus, they are the most likely to be accustomed the convenience of websites like Amazon.com. Their patience for the exchanges will quickly run thin should they log on to the exchange websites and find it difficult to learn the price of their insurance, to find out how much in subsidies they qualify for (if any), and to enroll. Such frustration will make it less likely they will sign up.

On the flip side, who is most likely to endure the difficulties of exchange websites? If the exchange website initially prove unworkable, who is most likely to return weeks or months later when the websites may be functional? They will be the people who see the most benefit in having insurance—namely, those with health problems. The technology glitches add to the exchanges’ system of incentives that discourage young and healthy people and make buying insurance appealing largely to those with high health care costs.

While I’m on the subject of glitches, this morning I finally got through the “security questions” portion of setting up an account on the Federal Exchange website.  (For more on that, go here.)  After answering the questions, I hit the “Sign Up” button, and: