ConservativeBlog.org
Posted at 04:28h in Articles, Blog by David Ridenour 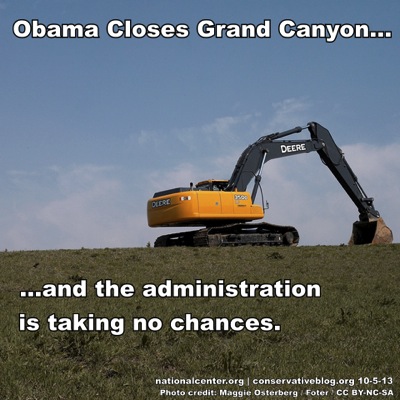 The Grand Canyon is closed.

Not really, but the federal government has cut off access to this grand work of nature.

It’s part of a pressure campaign to convince the American people that it really can’t do without a bloated federal government.

So Obama figures he’d better shut down some stuff that doesn’t need government to stay open – and in the Grand Canyon’s case, didn’t need any government help to be created.

Never mind that small businesses are being hurt, vacations are being cancelled, and people are losing money in a very bad economy.

Never mind that Arizona offered to pay all expenses for keeping the canyon accessible and that the canyon wasn’t closed during the last big government shutdown.

Obama doesn’t care. Camp David is still open, the tax-funded golf course at which he plays is open, and Obama expects to make so much money as a former president that he’s now talking about buying himself an NBA team.

He’s got his. His Administration has never been about helping the average working American, and now that he’s been re-elected, he’s certainly not going to start caring now.