ConservativeBlog.org
Posted at 04:24h in Articles, Blog by Amy Ridenour 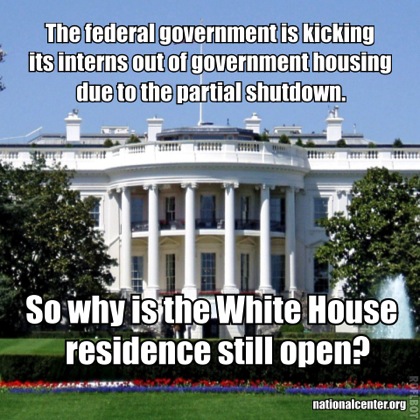 NASA has kicked its interns — at least one from as far away as Puerto Rico, so you know he’s not going to commute from home — out of government housing due to the partial government shutdown.

The federal government has kicked senior citizens and others out of their privately-owned homes just because they were built, quite legally, on federal land.

People are being kicked out of their businesses because they are located on federal land, and even being prohibited from fishing in the ocean.

The egotistic Feds must think they created or maintain the ocean…

And yet, is the White House residence closed?

The government always takes care of the big guys first.

It was true in the Soviet Union, and it’s true here.