ConservativeBlog.org
Posted at 16:22h in Blog, Health by David Hogberg 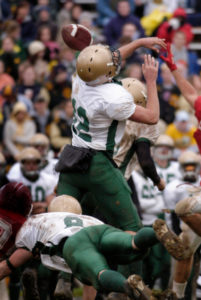 A pass attempt is blocked at the line of scrimage.

people are losing their health insurance, Democrats are starting to come clean.  Sort of.  Via Jonathan Strong, here is Minority Whip Steny Hoyer this morning:

“We knew that there would be some policies that would not qualify and therefore people would be required to get more extensive coverage,” Hoyer said in response to a question from National Review.

Asked by another reporter how repeated statements by Obama to the contrary weren’t “misleading,” Hoyer said “I don’t think the message was wrong. I think the message was accurate. It was not precise enough…[it] should have been caveated with – ‘assuming you have a policy that in fact does do what the bill is designed to do.’”

Uh-huh.  Next time the quarterback on your favorite football team overthrows a receiver, see if after the game he says his pass was “accurate, just not precise enough.”

And, by the way, the MSM is now reporting the Obama Administration new that millions of people would be losing their policies.