ConservativeBlog.org
Posted at 16:11h in Blog, Health by David Hogberg

Will the subsidies that people on the ObamaCare exchange protect them from premium increases and, thus, mitigate, if not prevent, a death spiral?  Yuval Levin made that case recently at NRO.

According to Levin, “The talk of a death spiral in recent days has often overlooked a crucial feature of the exchange system that provides a major cushion against the effects of cascading adverse selection, though not against a whole host of other related problems.”  Levin claims that the subsidies are that crucial feature.  He continues:

An insurance death spiral is a feedback phenomenon — a bad risk pool in Year One causes drastically higher premiums in Year Two which causes an even worse pool that year and on and on. The key to it is that it causes consumer premiums to go up so that only people with high expected health costs (for whom the high premium is still less expensive than staying uninsured) stay in and drive the cycle on. But in the Obamacare exchanges, the subsidy system is intended to prevent people from feeling the effect of annual premium increases after the first year. The subsidies are designed to make sure that each recipient pays only a certain percentage of his income in premium costs. That percentage stays essentially the same year after year, so if premiums get more expensive the government covers the difference. [Itlalics]

The subsidies may be intended to work that way, but do they?  In many ways they don’t. 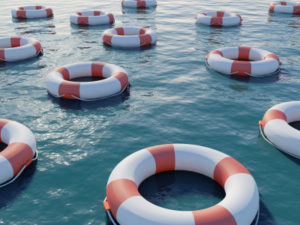 First, as a study I co-authored with Sean Parnell, many people age 18-34 who are under 400% of the federal poverty level ($45,960 for an individual) won’t be getting a subsidy. The reason that some people who have incomes below 400% FPL won’t qualify for a subsidy is found in the formula used to calculate the subsidies. The formula is the price of the second lowest-cost silver plan on the exchange minus the “applicable percentage.” Under ObamaCare, the applicable percentage is the percentage of your income that you must pay toward your insurance before you qualify for a premium subsidy on an exchange.   If the dollar amount of your applicalbe percentage is $1,000 and the second lowest-cost silver premium is $1,500, you get a subsidy of $500.  But if your applicable percentage is $1,500 or more, you get no subsidy.

Our study found that in California, on average, no one age 34 making $34,200 or above will get a subsidy on the exchange in 2014 because the second-lowest silver premium is less than the applicable percentage at that income level.  Even if the silver premium increased enough for 2015 so that the subsidies would now cover 34-year-olds up to $40,000, those making above $40,000 would not be protected from the premium increase.

But even those people who don’t qualify for a subsidy in 2014 but would qualify for one in 2015 if premiums rise wouldn’t necessarily be protected from experiencing a big increase in premiums.  For example, according to the Dept. of Health and Human Services, the average second lowest-cost premium among the 36 states on the Federal exchange for a 27-year-old is $214 a month.  The lowest-cost bronze is $185.  A 27-year-old earning $35,000 annually has an applicable percentage of 9.5% of his income or $3,325.  Monthly, that’s about $277.  Since the applicable percentage is greater than 2nd lowest-cost silver plan, he gets no subsidy.

Now, let’s see what happens when those premiums increase 50%.  Then the second lowest cost silver plan is $321 a month while the cheapest bronze is $256.  The 27-year-old is now eligible for a $44 a month subsidy ($321-$277).  Here is table showing the initial premiums, the premiums with the 50% increase, and the effect of the subsidies on the premiums:

In this case the subsidies don’t protect the 27-year-old from a premium increase.  Indeed, he’d pay about 29% more for for the silver plan and 24% more for the bronze plan.

The subsidies will yield varied effects on the premiums that people will pay.  Some may be protected from premiums increases like Levin contends, but clearly others will not.  Thus, it’s unlikely that the subsidies will prevent a death spiral.