ConservativeBlog.org
Posted at 11:20h in Blog, Health by David Ridenour 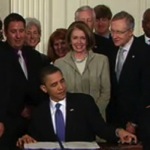 You’d think that in the middle of the ObamaCare meltdown — ObamaCare having just barely been approved with no bipartisan consensus and bypassing ordinary Senate procedures — that Majority Leader Harry Reid would have learned something.

He didn’t: He just used the “nuclear option” for presidential nominees, allowing the Senate to confirm with a simple majority.

If I were a member of the opposition on the Hill, I’d be issuing press releases noting this similarity.