When the only tool you have is blind hatred, you tend to treat everything with vitriol.

That appears to be the working motto of MSNBC.

Rather than reporting news or analyzing President Obama’s laws and policies, the network’s talking heads seem to spend the majority of their time tearing down their enemies – i.e. conservatives.

If MSNBC wants to take a shot at being competitive, it’s time for some of those heads to roll. 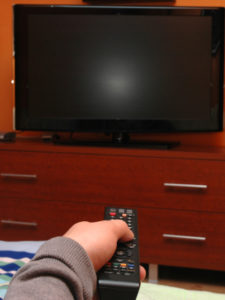 Turn on TV with remote control

If MSNBC wants to take a shot at being competitive, it’s time for some of those heads to roll.

One myopic MSNBC mouthpiece who should be banished from the airwaves is Martin Bashir.  On his November 15th program, the anti-conservative commentator actually suggested that someone should defecate and urinate on former Republican vice presidential candidate Sarah Palin.  After immediate backlash, Bashir attempted to apologize.  He got about as far as President Obama did in his apology over the ObamaCare fumble.

The hatred and spleen venting from the left is endemic, in part, because many liberals care more about groupthink than accountability.  Despite the repugnant nature of Bashir’s comments, MSNBC has not suspended, fined or punished Bashir in any way.  The National Organization for Women and the Feminist Majority Foundation have both refused to condemn Bashir’s comments.  In short – Bashir got away with his outrageous and hateful behavior because Palin is conservative, straight and white – a combination that qualifies an individual for endless assault from the mainstream media.

But if Bashir is simply going for shock value to gain viewership, the numbers don’t bear him out.  Writing in Mediaite, Joe Concha explained:

It’s a consistent, disturbing theme at MSNBC: [President] Griffin allowing anchors to say just about anything without consequences.  Could you imagine if Neil Cavuto or Jake Tapper, who occupy the same timeslot on Fox and CNN, respectively, suggested anyone s*it in anyone’s mouth on national television, as Bashir did last week?

And it’s not as he’s killing it in the ratings.  Day after day, Bashir easily owns the lowest-rated show in his timeslot among the big three.  If Griffin were smart, he’d use this episode as an excuse to get rid of Bashir.

That’s a big ”if.”  MSNBC President Phil Griffin appears so obtuse to his job and his network’s performance that he has casted MSNBC as “not the place” for NEWS, and yet bragged in March that his team of conservative-bashers would beat the Fox News Channel (which he wittingly refers to as “Loserville”) by the end of the year.

Griffin may be suffering from delusions.  Fox News could cease programming for the rest of the year and may still have more total viewers than MSNBC.  He is so deluded to the realities of the cable television market that he called for an investigation when, on the second night of Megyn Kelly’s new primetime Fox News Channel program, she crushed MSNBC’s “Rachel Maddow Show” in the ratings

Has he seen these two shows?  Maddow’s is incorrigible and largely unwatchable.  Kelly’s is thoughtful and topical.  It’s a wonder Maddow has the few viewers that she does.

For the record, Nielsen conducted an invetigation into the ratings – and Kelly really did trounce Maddow.

And what about that face of MSNBC, the irredeemable Maddow?  Well, she seems so despondent about the litany of bad news and scandals coming out of the Obama Administration, that she spent a good portion of her November 19th broadcast railing against conservatives being bothered that Obama omitted the words “under God” when he recently recited the Gettysburg Address.  Obama’s omission might be worthy of a small media mention, but a long-form analysis of the conservative reaction to it – that hardly qualifies as pressing news.

When your job is to speak truth to power, but you take your marching orders from that power, it obviously creates quite a conundrum.  To remove all doubt about their impartiality, yesterday, President Obama held on off-the-record meeting with liberal journalists that included multiple MSNBC personalities.  It gave the appearance that he was giving them their marching orders in his time of need.

If you still think media in the country is independent, I have some real estate on the moon I would like to sell you.  Cheap.

MSNBC extremism is not something that can be relegated to isolated incidents.  Nor can they be considered accidents.  MSNBC stalwart Chris Matthews, in fact, recently admitted that MSNBC’s leadership exerts pressure on its hosts to toe the liberal line and to present stories with a progressive bent.

The pejorative palter and offensive leftist commentary uttered daily on MSNBC is almost impossible to keep up with, but here are a few, very recent examples:

And this is just a sampling from only the last few weeks.  But these examples speak to a much deeper issue.

MSNBC’s problems are systemic, leading some media observers to call for a complete upheaval of the network.  Carl Cannon, the Washington Bureau Chief for RealClearPolitics, recently wrote that MSNBC’s whole format should change, explaining that:

An analysis of programming on the three main cable news networks by the Pew Research Center in November and December of 2012 found that Fox and CNN distributed airtime pretty evenly between reporting and opinion.  CNN featured more newsgathering than opinion (54 percent to 46 percent), while the Fox News Channel reversed this ratio.

MSNBC was the outlier. Fully 85 percent of its airtime was devoted to commentary — virtually all of it left-leaning — while only 15 percent went to news reporting.  Even allowing that this approach is driven by business considerations (newsgathering being more expensive than bloviating), there are a couple of intrinsic problems with this approach.

The first is that relentless partisan criticism invariably leads to name-calling.

Cannon essentially explains that MSNBC suffers from the same conundrum as someone such as Lady Gaga.  Once you shock your audience, you have to keep ratcheting up the shock value.  With Lady Gaga, this means stranger outfits and even more bizarre performance spectacles.  With MSNBC, it means calling conservatives ever-worse names and constantly operating in attack mode.

On MSNBC, conservatives are racist, sexist, homophobic, and moronic.  That would be dubious enough, except that it turns out that if you view so many of your fellow human beings this way it spills out at the edges.  You make sexist comments of your own, homophobic comments, dumb comments.  You race-bait in the editing room.

Bashir’s apology, you see, was only the latest at MSNBC.

There was the time host Ed Schultz was suspended for a week for calling conservative author Laura Ingraham a “right-wing slut.” (“I used vile and inappropriate language,” he said.)  Or when MSNBC repeatedly played a slyly edited tape of George Zimmerman’s 911 call to make it look, inaccurately, as though Zimmerman had disparaged Trayvon Martin for being black.

In addition to Cannon, Mediaite’s Concha is also calling for major MSNBC changes.  In a column titled, “A Year of Poor Decisions Show Why It’s Time for a Change of Leadership at MSNBC,” Concha details MSNBC President Phil Griffin’s litany of buffoonery that is causing the network’s seeming death spiral, and suggests he exit stage left.

From changing host’s time slots just to change them back, to hiring Al Sharpton with the promise that he could continue to agitate and hiring Alec Baldwin in the first place, Griffin can’t seem to make a step without tripping over himself.

Comcast is now MSNBC’s parent company, after acquiring full interest in NBC Universal earlier this year.  So the buck stops with Comcast CEO Brian Roberts.  However, Roberts is himself a radical leftist who is close friends with President Obama, making it unlikely that he has the motivation to correct MSNBC’s garbage programming and demonizing of conservatives.

If Roberts keeps Griffin, Comcast’s board of directors should take a serious look at their CEO and ask why he is placing political ideology ahead of corporate profits and sound business.