05 Dec 2013 The Quality Of Exchange Plans Is Not Better

ConservativeBlog.org
Posted at 08:37h in Blog, Health by David Hogberg 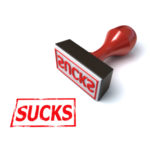 Contrary to the claims of the President, the quality of exchange insurance is not necessarily better.

Yesterday at a Ways and Means Committee hearing, Dr. Scott Gottlieb, a resident fellow at the American Enterprise Institute testified:

…it’s now well established that more than 50 percent of the plans sold on healthcare.gov (including the lower-cost plans that consumers are being most encouraged to purchase) are “narrow network” options that offer a very limited choice of providers. I don’t think the full scope of how restrictive these networks have become is fully appreciated, or the extent of the costs that are going to get transferre

d to patients. This is going to put particular hardship on patients with special medical needs or serious illnesses.

Gottlieb examined the provider networks for the leading Preferred Provider Organization in nine state with Bronze policies on offer in their exchanges.  Here is what he found regarding the availability of specialists:

Gottlieb’s research puts the lie to another of President Obama’s claims.  The claim that health plans on the exchange would be better wasn’t as prominent as “if you like your plan, you can keep your plan,” but the damage is serious nonetheless.  I’ll end with some unnerving anecdotes from Gottlieb’s testimony:

We found one low cost plan in Florida that currently only has seven pediatricians in its network, to service a county that has 260,000 children according to census data.

In San Diego County, we found a health plan that doesn’t have a single pediatric cardiologist in its network. In San Bernardino County, the nearest urologist offered by one plan is 80 miles away. The same health plan has 9 dermatologists but most of these doctors are at least 100 miles away and none appear to do specialized skin cancer surgery.