ConservativeBlog.org
Posted at 06:44h in Blog, Health by David Hogberg 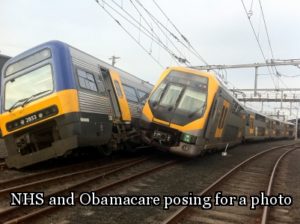 The bureaucrats at the Dept. of Health and Human Services and those at Great Britain’s National Health Service should consider getting together to compare notes on 2013.

I don’t know who would come out the winner in the pity competition, but at least the ObamaCare exchanges aren’t abandoning 1 in 4 women who are giving birth:

One in four new mothers were left alone by midwives when they were in labour, the NHS watchdog has revealed.

Some were forced to give birth on the floor in waiting rooms, having earlier been told not to come in as they were ‘not in enough pain’.

Other women said they felt ‘lonely, helpless and uncared for’ after being made to wait two hours for morphine following a caesarean.

The NHS’s chief inspector of hospitals Professor Sir Mike Richards, who oversaw a survey of 23,000 women, said some cases were ‘shocking’.

He added that failings in maternity wards were turning what should be the ‘most joyous’ experience of a woman’s life into one of the ‘most frightening’.

Treatment of pregnant women isn’t the only appalling problem in Britain’s single-payer system.  According to the Daily Mail:

Thousands of cancer patients are being denied urgent tests by their [General Practitioners], figures show.

Family doctors are typically referring fewer than half of all victims for fast-track appointments that are meant to ensure they have the best chance of survival.

Here’s a few other highlights:

–A “survey said thousands of patients have all but given up trying to secure appointments with their family doctor.”

–A report released in early 2013 was the fourth investigation of its kind into the terrible neglect at Mid Stafford Hospital.  A previous report found that conditions at Stafford may have led to 1,200 needless deaths between 2005 and 2009.

-Between September 2012 and September 2013, “255,640 patients were kept waiting outside English hospitals [in ambulances] for at least double the 15 minutes recommended by NHS guidance.”  A patient in “Wales was made to wait six hours and 22 minutes before being admitted, while another in the East of England was delayed for five hours and 51 minutes.”

At the same time this is going on, Physicians For A National Health Plan, a single-payer group in the U.S., is promoting a new video and twitter hashtag to promote a single-payer bill in Congress.  Amusingly one of the actors in the video says “maybe I should’ve been British.”