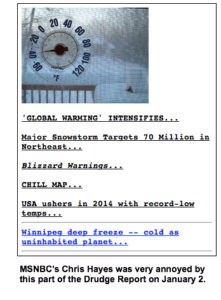 MSNBC’s Chris Hayes is not happy that skeptics of the catastrophic anthroprogenic global warming (CAGW) theory, in particular, Matt Drudge, have been pointing out that in this age of global warming, it often seems very cold.

MSNBC’s Chris Hayes is tired of conservatives snarking about global warming every time it gets cold.

During his show Thursday evening, Hayes complained of the “strange bizarre underworld of climate trolls” that came to life when Matt Drudge ironically linked an article on the Drudge Report about cold weather.

“Of course, no one ever said that climate change meant it wouldn’t ever be cold,” Hayes said defensively, calling the annual tradition “willful stupidity” of conservatives “who delight being on the wrong side of history.”…

Hayes is of course absolutely correct that cold weather in any one place, or even any one continent, or any particular weather anywhere at any given time, does not validate or invalidate the CAGW theory.

But Hayes might want to remind himself that he believes this, because Hayes has linked CAGW to various droughts and high temperature readings in selected locations and even the lack of snow at the 2013 Iditarod:

The evidence is overwhelming. 2012 was the hottest year on record in the Continental United States. Across the Midwest and Texas, crops shriveled in the worst drought in 50 years. In Alaska, qualifying races for the 2013 Iditarod were canceled. The reason: not enough snow.

He also blamed New Jersey Governor Chris Christie for “so woefully underprepar[ing] his state transportation agency for the effects of climate change that the state sustained over $120 million of damages to their [sic] system after [Hurricane] Sandy.”

In Chris Hayes’ book, record-low temperatures say nothing conclusive about global warming, but snowfall at the Iditarod does. Sorry, but it doesn’t work that way. Neither proves the theory. Nor does either prove the theory false.

Spiering also quoted Hayes’ annoyance at CAGW skeptics (to Hayes, “the right wing”) laughing at the global warming research and tourism ship Akademik Shokalskiy becoming stuck in the ice in Antarctica, as did an ice cutter responding to its captain’s call for rescue.

…”The right wing had a field day, pointing and laughing at the global warming believers, who just to be clear, are only a group of scientists risking their lives for no monetary gain and little glory in order to help save the planet,” [Hayes] said defensively.

In fact, tourists and journalists outnumbered scientists on the Akademik Shokalskiy (some passengers were minors), and the leader of the expedition has a carbon capture business that he runs for, yes, monetary gain — monetary gain that may be greater if governments around the world continue to buy in to the CAGW theory.

It also appears that the Akademik Shokalskiy got stuck in ice after passengers on board failed to heed the ship captain’s call to get back on the ship promptly, as ice was building up. Hardly the mark of serious scientists with a keen understanding and respect for nature.

CAGW theory adherents cite events such as Hurricane Sandy because they can’t point to evidence that their models are working. And while we might get a laugh out of a seeing a global warming profiteer get caught in ice trying to publicize melting ice, the real story is that billions have been spent, energy prices needlessly raised, and jobs lost, in service to climate models that do not work. And that’s true no matter how hot or cold it is at any given time outside your own house. Or Chris Hayes’ house.