ConservativeBlog.org
Posted at 12:27h in Blog, Health by David Hogberg

Wasn’t 2013 fun?  Well, if you were in charge of getting Healthcare.gov to work, or one of the millions who lost their insurance, or were Kathleen Sebelius…maybe not so much.

But, there are always ways to find levity even in the worst years burdened with the worst public policy in decades.  Below are my five favorite Obamacare commercials of 2013.  They can be returned to again and again for many hours of amusing mockery.

Before I get to my list, though, I’d like to address why these ads were so, well, STUPID? 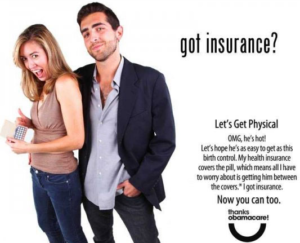 It seems sheer idiocy to run an ad, like the one above from the Colorado Exchange, promoting promiscuity as a benefit of Obamacare.  The same with keg parties.  The reason liberals are running such idiotic ads is that they think most of you are idiots.  It is a long-held truism on the left (see, for instance, John Kenneth Galbriath or Raplh Nader’s Raiders) that advertisers can rather easily manipulate the great unwashed masses into buying “things they had never dreamed they needed.”  If that’s the unexamined premise held by the liberals who produced and approved these ads, then you be sure they are not going to be advertising Obamacare using the Socratic method.

Anyway, let’s get on with the fun:

1. When They Say It’s Not About The Money…

This was the winner of the Dept. of Health and Human Services’ Healthy Young America video contest.  As I noted when this came out, “if you have to sell something by telling the target consumer to ‘forget about the price tag,’ isn’t that a tacit admission the product is overpriced?  I’m hard pressed to think of the last time a commercial made a similar pitch.  The reason, I suspect, is advertisers know that if you encourage people to ignore the price of what you’re selling, most of the public, including younger people, see multiple red flags flying up the poles.”

2. President Hip Hop.  No commentary needed for this one.  Word:

This next one is from the Oregon Exchange that I’ve dubbed:

3. Julia In The Sky With Diamonds:

Not only is it a bit creepy, it gives viewers the web address to Cover Oregon, a website that still isn’t working.  Also, I doubt Oregonian David Mahler appreciates the ads message of “we are free to be healthy.”

When it came to post-card type ads, I initally had a hard time choosing a favorite.  The ones from Colorado were in the running, as were these e-cards from AARP.  But then Organizing for Action came through for me and made it easy:

I suppose that some of the mockery this ad and its “model,” Ethan Krupp, received was unfair, but it’s hard to think what it was.

And, finally, here is my favorite.  It comes with a warning though.  If you have small kids nearby, do not watch until they leave the room.  Also, it may be NSFW.

You know that Obamacare supporters are getting desperate when their response to this video is “whatever it takes.”