Today’s enrollment report from the Dept. of Health and Human Services finally releases data on the age breakdown in the Obamacare exchanges.  As many of us have expected, the exchanges aren’t even close to the number of young people the Administration claims to need to prevent an eventual death spiral.

But that’s not the really dispiriting data for Obamacare supporters.  What should have them panicking is the data HHS released on subsidies.  Page 11 of the report gives a breakdown.  Of the 1.9 million enrollees for which there is data, about 1.65 million, or 79%, have financial assistance.  That rate is probably as high as financial assistance is going to get.  Despite that, enrollment of the 18-34-year-olds is, well, pitiful.

According to the Administration, about 2.7 million of the projected 7 million enrollees in the exchanges need to be 18-34-years-old—that’s about 39%.  Here is the age breakdown from the report:

Only 24% of those enrolled in the exchanged are between the ages of 18-34, a far cry from 39%.  Those age 45 and over—i.e., those who are likely to make the most medical claims—comprise 55% of enrollment.

The crux of the matter is if an enrollment population is comprised of only 24% 18-34-year-olds when nearly 80% of that population have subsidies, what are chances that the age mix will improve? 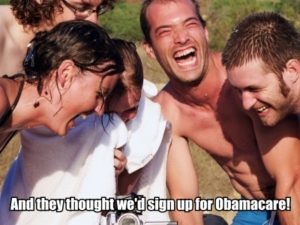 Of course, of all age groups, the young invincible cohort seems the most likely to procrastinate until March 31. Thus, it is possible that there are still a lot of young invincibles out there who would get a subsidy and have yet to sign up.

But there are factors working against that.  As Sean Parnell an I pointed out last September, the subsidy formula is rigged against the young.  And even if someone age 18-34 qualifies for a subsidy, it is often times not enough to cover the large increase in premiums they face on the exchange.

In short, if this is the age breakdown now, chances are there won’t be much improvement in the next two-and-a-half months.  And after March 31, we won’t be talking about whether a death spiral is coming but rather how severe it will be.