ConservativeBlog.org
Posted at 11:15h in Blog, Health by David Hogberg

Furman’s claim doesn’t hold water since neither of those innovations had any impact on Medicare finances in 2010-2011 because they didn’t begin until 2012.  Further, the amount of money those changes saved in 2012 was too small to have much of an impact on Medicare’s growth rate.

Rather, what has slowed Medicare’s growth are reductions in the Medicare Advantage program, the program that pays private plans to provide Medicare benefits to beneficiaries.  The first cuts to Medicare Advantage were instituted in 2009 and came into effect in 2010, prior to ObamaCare.  Obamacare was supposed to cut about $13.9 billion from Medicare Advantage between 2011 and 2012 according to the Congressional Budget Office (see page 30).  But as President Obama headed into the 2012 election, he didn’t want to risk the ire of the millions of seniors in Medicare Advantage plans, so he infused Medicare Advantage with about $8 billion in additional funding which the Administration laughingly called a “Quality Bonus Program.”

Still, that wasn’t enough to offset the full cuts to Medicare Advantage in 2011 and 2012, and so the growth rate per enrollee dropped, as seen in this table: 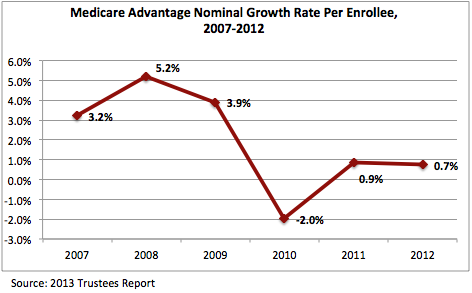 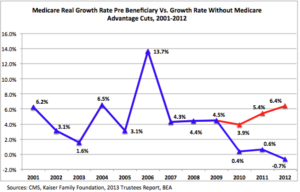 However, it is misleading for Obamacare apologists like Furman to claim that innovations in the law are reducing Medicare’s growth rate.  In the end, it comes down to old fashion spending cuts.