ConservativeBlog.org
Posted at 08:46h in Articles, Blog by David Almasi 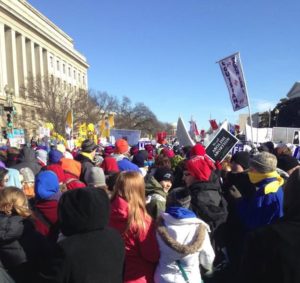 After being taken to task for virtually ignoring what they now report is “the world’s largest” pro-life event that has been happening on their home turf for decades, it appears the shareholder activism of the National Center’s Free Enterprise Project prompted the Washington Post to upgrade its coverage of the annual March for Life.

Every January 22, the anniversary of the release of the Roe v. Wade opinion by the U.S. Supreme Court, hundreds of thousands of pro-life activists converge on the nation’s capital in all forms of weather.  That should be enough of a story all by itself.

Yesterday, the federal government was officially closed.  It was the day after a major (by D.C. standards) snowstorm that paralyzed the region.  Yet March for Life organizers reported that hundreds of thousands still attended (and the Post reported temperatures at the March were near the single digits and that many buses and trains bringing people to the March were cancelled due to the weather).  Police no longer issue crowd estimates.

Coverage of this major event in the Washington Post used to be meager.  Not this year.

This year’s March for Life received coverage on page 2 of the front section of the Post.  Last year, it was covered on page 1 of the Metro section – and received less-favorable coverage than a story that appeared the following day about a rally of less than a thousand people who supported gun control.

I raised the skewed and apparently biased reporting on pro-life activism from both 2013 as well as over the course of more than two decades at last year’s Washington Post shareholder meeting (the last one, since the Post was later sold to Amazon founder Jeff Bezos and is no longer a publicly-traded entity).

At the 2013 Post shareholder meeting, I pointed out to then-CEO Donald Graham that alienating pro-life sympathizers in particular and conservatives in general with such slanted reporting on issues and events of importance to them such as the March for Life is “not a winning business model.”

Graham admitted the paper’s staff “make[s] mistakes,” and agreed that criticism of the Post’s coverage of the March was valid.  Post publisher (and now also CEO) Katherine Weymouth also conceded that mistakes were made, and later noted in one-on-one conversation with me after the meeting that the Washington Post newsroom was likely around “90 percent” liberal and that the reporters’ and editors’ personal bias “obviously… comes through” in coverage.

It’s nice to see that some public shaming of the Post for this may have brought about more objectivity in reporting about the pro-life movement.

Yesterday’s page 2 article contained two photos of the March for Life, both of which showed march participants.  Usually, the hundreds of thousands of people who show up were marginalized by one photo of marchers and one photo of pro-abortion opponents on the sidelines.  Approximately 18.75 column inches was devoted to a very positive portrayal of the March while 4.25 column inches featured reaction the Obama Administration and other supporters of abortion.

Additionally, the article — authored by Post reporters Michelle Boorstein and Carol Morello — seemed to be much more accommodating that usual mainstream media reports about pro-life activism.  For example:

At the shareholder meeting, I pointed out that the Washington Post coverage of the March for Life in 2013 had not changed much since then-Post ombudsman Richard Harwood took the paper to task 23 years before for biased March coverage that he wrote “left a blot on the paper’s professional reputation.”

This year, the Post’s reporting changed for the better — and it would seem that the Free Enterprise Project’s shareholder activism can definitely take at least some — if not all — of the credit.

The Post is now a private possession of Jeff Bezos.  As the founder of Amazon, Bezos has been highly successful in bringing the American public what they want.  There are no more shareholder meetings in which the Free Enterprise Project can push for objective reporting on abortion, but it can be hoped for that this year’s trend sticks.