ConservativeBlog.org
Posted at 08:29h in Blog, Health by Amy Ridenour 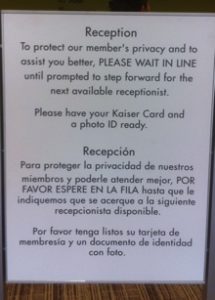 I admit that ObamaCare, voter ID and racism do not seem related at first glance, but hear me out.

The central selling premise (other than “if you like your doctor or health plan, you can keep them”) of ObamaCare was its universality.

That is, we were told that if ObamaCare was adopted, everyone would have health insurance coverage.

What do all of these programs have in common? You have to sign up, and to do that – here’s where the racism comes in – you have to prove who you are.

Moreover, to stamp out fraud, very many patients with ObamaCare-approved providers have to show an ID every time they go to the doctor.

Why I myself must show a photo ID every time I see my doctors, and they know what I look like (granted, they’ve seen me naked, so perhaps forced themselves to forget).

If ObamaCare is universal, then everyone can get enrolled. Which means that everyone can be expected to prove who they are. Just as they do with voter ID.

Either neither of them is racist, or they both are.