ConservativeBlog.org
Posted at 04:14h in Articles, Blog by David Almasi

With William Barber and the North Carolina NAACP, it’s do as I say and not as I do.  At the “Moral March on Raleigh” last Saturday, invitees to the event — called in part to protest the recently-instituted voting protections in that state that feature a requirement for identification such as a driver’s license and passport at the polls – were told to bring photo identification such as a driver’s license or passport with them as an important “do” for participation in the event.

But why should anyone be shocked by the inconsistency.  Reverend Barber’s overall “Moral Monday” campaign is an allegedly non-partisan and non-violent campaign “opposing the Republican agenda in North Carolina” (according to the Associated Press) that resulted in over 900 related arrests of activists in 2013.

The North Carolina NAACP, of which Barber is president, is also involved in a lawsuit seeking to overturn North Carolina’s polling place protections.  The legal complaint says that ballot protections unconstitutionally restrict voter access.  Barber says that asking for proof of identity before something as important as a ballot is given to a person “takes us backwards.” 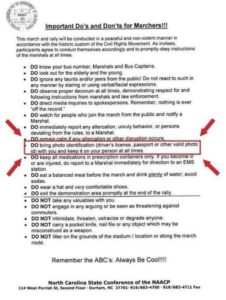 However, on an official handout of “Important Do’s and Don’ts for Marchers!!!” that was provided to “invitees” to the Moral March by the NAACP, one item states “DO bring photo identification (driver’s license, passport or other valid photo ID) with you and keep it on your person at all times.”  What is “valid” is not stated.

With the “invitee” language, it is implied that this march is an exclusive, private event that took place on the public streets of North Carolina’s capital city.  The NAACP one-sheet advised invitees to rat out anyone they know not to have been invited or joining spontaneously, advising then to “watch for people who join the march from the public and notify a Marshal [sic].”

So, the many everyday things that a North Carolina resident needs to have government-issued ID for – such as banking, shopping, mass transit by rail and air and voting – now includes joining a NAACP rally protesting an ask for an ID to vote (if invited).

Perhaps the reminder for bringing an ID is because, of the thousands of people who reportedly participated in an alleged grassroots event, community organizers told the Associated Press that they expected people from 30 states would be participating in the rally.  They might have needed it to travel.  Or verify their credit card when checking into a hotel.

According to a poll of actual North Carolina voters conducted for Elon University in 2011, there is hardly a smidgen of opposition to voter ID laws.  Of those surveyed, 80 percent believed the state’s voter ID law was fair and 75 percent supported the ballot safeguard.

In many ways, this handout hassle is Reverend Barber’s third strike.  Since the beginning of the year, Barber made national news and earned dubious recognition on three occasions.  Already, he demeaned Senator Tim Scott (D-SC) by comparing his to a ventriloquist’s dummy and said black conservatives in general are “mouthpieces” for a nondescript conservative power.

It’s hypocritical, and none of this sits well with the conservative activists of the National Center’s Project 21 black leadership network.

Apparently, neither the NAACP staff that planned the event nor William Barber who presided over it took the time to review their own ground rules for their “Moral March on Raleigh.”

They are against having to show a valid ID to vote.  Yet they included the same stipulation as a requirement for people to be involved in the actual march.

We are either witnessing gross hypocrisy here or a case of incompetent leadership.  Perhaps both!

Adding to this criticism is Project 21 member Kevin Martin, who said:

There is no logical excuse for the NAACP to remain opposed to photo ID requirements for voting that were recently passed in many states.  This is especially true considering allegations of stolen votes and the extensive coverage of credit-related identity theft in general.

The very fact that the North Carolina NAACP requested its supporters show up with official government-issued ID in hand to rally against the very same requirement exposes their misleading talking points that allege minorities, women, the elderly and students have a harder time obtaining such credentials.

It’s beyond time the NAACP dropped these discredited excuses and joined the majority of Americans who support protections that secure free and honest elections.

It’s time for the yelling and the lawsuits to stop.

The NAACP’s call for participants to bring a valid government-issued ID to their rally is not only ironic, but hypocritical.

For an organization that deems voter ID laws as disfranchising to minorities, they sure are willing to embrace it when they are setting the rules for their own event.

Given Reverend Barber’s demeaning remarks in the past toward Senator Tim Scott, in which he likened the lawmaker to a ventriloquist’s dummy, I’m not sure Barber’s motives are objective or relevant.