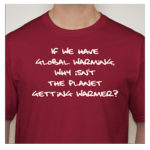 For a decade now, believers in CAGW, that is, the theory of catastrophic anthroprogenic global warming, have repeatedly made the absurd claim that 97% of all climate scientists believe human beings are causing the Earth’s temperature to dangerously rise.

They don’t always phrase it exactly like that, but that’s the implication, and that’s what they very, very much want you to believe.

The idea is to use the appeal to authority fallacy to convince the public to believe in CAGW (and costly public policies based upon same) because 97% of all climate scientists supposedly do.

Having kicked around within the climate science public policy debate for a quarter of a century now, I’ve seen the various studies (all magically reaching the “consensus” false number of 97%) come and go, and I’ve read along as various qualified observers, not all of them global warming skeptics by any means, took them apart.

For example, did you know that one way these studies can reach the magical consensus number of 97% is by defining human-caused global warming so broadly, even global warming skeptics qualify for the 97% percent?

In other words, the skeptics are wrong because they disagree with themselves.

Seriously. This passes for a reason to believe in CAGW in some quarters. (Like the White House.)

To be fair, very few of the people who use the 97% number to look down on skeptics have examined the “97% consensus” studies even superficially. Since they are quoting studies they haven’t read (and which require no deep science knowledge to read), this is not to their credit, but in many cases the sin is more laziness than malice.

It’s also a lot easier for a believer in CAGW to quote a “97% consensus” figure they saw online somewhere than to explain why — here’s that number again! — 97% of climate models were shown in 2013 to be running hotter than reality.

But why bring this all up today? Because the Friends of Science Society, a Canadian group based in Calgary, has just released a new report examining the actual data behind the “97% consensus” figure (it also mentions the 97% of climate models run hot figure on page 21, if you’re interested).

If you are among those who are tired of having the 97% consensus allegation thrown at you — or, more important, if you are one of those throwing it — you can read the study here.