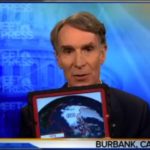 How much does David Gregory get paid, anyway?

“Meet the Press” had its climate change debate today and the result was the predicted disaster.

David Gregory began with an introductory question that included:

…In the scientific community, this is not really a debate about whether climate change is real. The consensus is that it is. The majority of those who believe in fact that it is caused by humans. There are certainly some in the scientific community who don’t believe that’s the case and who are skeptical about some of those conclusions. But nevertheless, there is still this level of consensus…

This is meaningless pap, because Gregory didn’t tell us how he defined the term “climate change.” Was he referring to the human-caused catastrophic global warming theory, or simply to changes in the climate? Or perhaps to human influences on the climate without asserting they will be catastrophic? However, meaningless or not, it set up the debate in favor of Nye by asserting an undefined “consensus” against Blackburn.

Gregory then asked, starting with Nye:

My question to begin with both of you is in this moment of — this kind of extreme weather moment — is it creating new urgency to act?

Nye responded, seriously, that it would be nice if someone were to invent new technologies, and observed that if someone did so, that person would earn a lot of money.

Gregory then asked Blackburn the same, adding that there is a drought in California and that President Obama thinks there is such an urgency.

Blackburn responded that no single weather event is caused by climate change and explained her view that the government does best when it uses a cost-benefit analysis to determine policy.

Gregory said a few sentences that had no clear point, and then asserted that there is a scientific consensus on the degree to which humans may cause climate change.

Nye responded that questioning whether individual weather events are due to climate change “is the same as uncertainty about the whole idea of climate change.” He called this questioning “unscientific” and “not logical.” Then he implied people with a different view are paid shills, saying, “it is a way apparently that the fossil fuel industry has dealt with our politics.” He closed by saying the opposite of his point at the start of this paragraph, saying that not tying any one weather event to climate change is not the same as doubting the “whole thing.”

Gregory then claimed many Republican Members of Congress believe in climate change but simply believe many of the policies being suggested to address it would “lead to unacceptable levels of economic hardship.”

Rep. Blackburn responded that any warming has been slight and tried to cite climate scientists from MIT and Georgia Tech, but was unable to complete her thought as Gregory interrupted to quote PR materials from a California natural gas producer touting that company’s commitment to a “low carbon economy.” It isn’t clear what point Gregory was making (is the company an advertiser?) but Gregory did conclude this part with a useful question, “the issue is what actions are taken and will they really work?”

Blackburn agreed with the question’s importance but Gregory tried to give the floor back to Nye without letting her answer. Blackburn answered anyway, saying:

Let’s say everything that Bill says is wrong is wrong. Let’s just say that. Then you say what are you going to do about it? What would the policy be? And will that policy have an impact? Now, even Director McCarthy from the EPA in answering questions from Congressman [Mike] Pompeo before our committee, said reaching all of the 26 U.S. goals is not going to have an impact globally. And, David, what we have to look at is the fact that you don’t make good laws, sustainable laws, when you’re making them on hypotheses or theories or unproven sciences.

To my mind, this is a key point. If even what the believers of the catastrophic global warming theory claim is true is true, the United States cannot, as a practical matter, do anything measurable about it while China and India are dramatically expanding their CO2 emissions. But it is extremely difficult to get any global warming believer to address this, and Blackburn had no success getting Nye to respond to it today. He ignored the point totally, saying instead, “once again the Congresswoman is trying to introduce doubt, and doubt in the whole idea of climate change.”

And then Nye hit his low point, saying, “what I would encourage everybody to do is back up and let’s agree on the facts. Would you say that the Antarctic has less ice than it used to?”

(Most people wouldn’t, because Antarctic ice is at record highs for the satellite era, and Antarctic sea ice extent was 27.4% above normal as of last week — go to Marc Morano’s Climate Depot site for more data and links to still more.)

But maybe Nye meant the Arctic, as he held up an iPad with a satellite picture of the Arctic on it at that point.

Either way, global sea ice area is normal right now. I conclude he meant to cherrypick some Arctic data and ignore global data and the Antarctic entirely, and messed up the attempt. It’s hard to feel sorry for him having a failed cherrypick.

Little else happened. You can watch it here or read the transcript here and see for yourself.

It’s a shame that moderators in the mainstream media and debaters like Mr. Nye can’t do a better job on issues that in fact really do matter, because even if catastrophic global warming is not occurring, we’re spending a catastrophic amount of money fighting it for nothing.

So it would be nice to have a serious, on-point public debate about this once in a while. The best way to do that would be to start a debate, with clearly defined terms and limit any particular debate, or portion thereof, to a specific, narrow question.

For example, whether catastrophic anthropogenic global warming is occurring is a very different question from whether the United States can do anything about it, and one can’t answer the second question by saying (falsely) that there’s a consensus on the science.

Rep. Blackburn got this, but it’s not clear that Bill Nye ever did. I believe Gregory got it, too, but he didn’t control the debate well enough to keep the two participants on the same topic at the same time.

Nye seems to be convinced that the only thing preventing some American somewhere from inventing a super technology that would halt or slow emissions is what he called “the denial” of the global warming consensus. His view here makes no sense to me. There is a market, a strong one, for new technologies that have the effect of reducing energy use and thus costs. This market exists independent of whether anyone believes in the catastrophic global warming theory.

Yet to hear Nye talk, unless everyone agrees on the science issues, the market won’t exist: “the more we mess around with this denial, the less we’re going to get done.”

Is Nye unaware that U.S. carbon emissions are falling, thanks largely to fracking and the horizontal drilling of natural gas, in response to market forces?

I get the impression that Nye is waiting for Congress to mandate the invention of new technologies and thinks we “deniers” are stopping this.

For the reasons I said yesterday, plus more, this debate never had much likelihood of usefulness. David Gregory doesn’t know the topic well enough to realize he needed to define terms early and often, and then NBC booked debaters with different skill sets. As a Member of Congress who is vice chairman of the Energy and Commerce Committee, Blackburn is an expert on policy implementation. Nye seems interested only in insisting that others endorse a “consensus” he seems reluctant to define. When the debaters are talking past each other and the moderator is out of his depth, failure is likely.

As a final note, NBC didn’t exactly do itself proud by misidentifying Nye as a “scientist” on on its website in several places. Nye is a successful engineer and actor. It was left to Blackburn, within the debate, to set straight for viewers the qualifications of the participants.