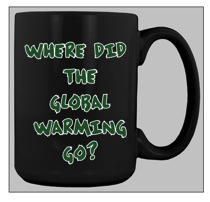 President Obama’s speechwriters seem to be locked in parts of the last century.

In the start of the short-yet-excellent video below created by Project 21’s Bob Parks for his “Black & Right” website, President Obama talks about the planet warming as if it is.

I’ve long been critical of the president’s speechwriters, as they seem uninformed about many basic public policy issues, but surely somebody on the President’s team could send them a memo once in a while to help keep them up-to-date.

Specifically, they might let them know that average global temperature stopped going up at the end of the 20th century.

There’s some debate over whether the “global warming pause” started in 1997 or 1998, but the fact that we’re in a pause is largely acknowledged. And for those of you who bought in to the whole human-caused catastrophic global warming theory, when I say “acknowledged,” I don’t just mean in the “skeptic” camp.

If you doubt me, take a look at recently-published papers by some of the biggest names among scientists who do believe humans are causing soon-to-be catastrophic global warming. What are they researching and publishing on? They are publishing on this question: Where did the heat go?

In other words, these scientists still believe in the global warming theory (some believe their models more than they believe their eyes). So they’re trying to figure out where the heat went.

I ask you: would climate scientists who believe in the global warming theory be publishing papers on “where did the heat go?” if the planet was still warming?

So maybe it is time to retire this talking point, White House.

If you have any interest whatsoever in being truthful, that is.