ConservativeBlog.org
Posted at 16:26h in Blog, Health by David Hogberg

You may recall this apology from President Obama to people who lost their insurance.  At about the 45 second mark he claims the insurance on the exchanges will be cheaper and there will be more choice of policies:

I have a new study out today titled “ObamaCare Exchanges: Less Choice, Higher Prices,” that tests those claims.  In short, they don’t hold up.

The study examines choice and price across metropolitan areas in 45 states.  In most areas, consumers had access to many policies on eHealth and Finder that were cheaper than the lowest price policy on the exchange. That includes even some people who had access to subsidies, such as a 27-year-old making $25,000 annually: 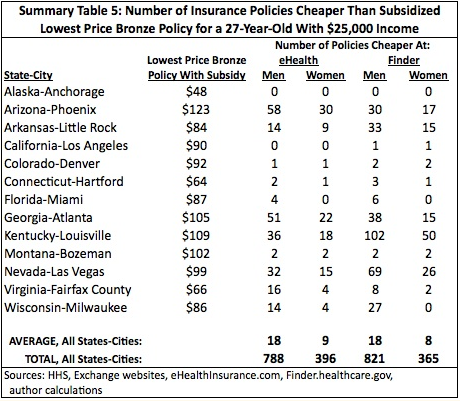 Thus far the exchanges have resulted in fewer choices and higher prices for consumers shopping for insurance. That will get worse if and when the exchanges start moving toward a death spiral.