ConservativeBlog.org
Posted at 10:58h in Blog, Health by David Hogberg

Today is the 4th anniversary of President Obama signing ObamaCare into law.  And despite what Minority Leader Nancy Pelosi says, the accurate term is “ObamaCare.”  As for calling it the “Affordable Care Act,” what’s affordable about it?

Here is a chart from Duke Professor Chris Conover showing the number of insurance winners and losers under ObamaCare: 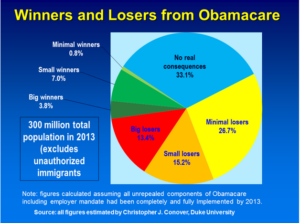 If you do that math, Conover finds that insurance losers under ObamaCare number about four to every one winner.  For more, see his blog post.

However, insurance consumers are not the only losers under ObamaCare.  So here is a list, far from comprehensive I’m sure, of ObamaCare’s losers:

1. Paul Krugman  Since these lists are usually a bit depressing, let’s start with a bit of schadenfreude. Here’s Krugman from July of last year:

Yet even as Republican politicians seem ready to go on the offensive, there’s a palpable sense of anxiety, even despair, among conservative pundits and analysts. Better-informed people on the right seem, finally, to be facing up to a horrible truth: Health care reform, President Obama’s signature policy achievement, is probably going to work.

And the good news about Obamacare is, I’d argue, what’s driving the Republican Party’s intensified extremism. Successful health reform wouldn’t just be a victory for a president conservatives loathe, it would be an object demonstration of the falseness of right-wing ideology. So Republicans are being driven into a last, desperate effort to head this thing off at the pass.

Yeah, ObamaCare—how’s that working out for you Mr. Nobel Laureate?

2. You Can Keep Your Plan…er…Look Over There! Income Inequality!  After at least 4.7 million people* on the individual market received cancellation notices, the Administration was casting about for a diversion.  Unfortunately, focusing on income inequality didn’t seem to work.  Maybe people just aren’t that interested in that when they’re worried they could be next.  Indeed, employees of small businesses are beginning to receive such notices, although we don’t yet know how many.  *It was almost certainly more than 4.7 million as the totals were taken from state insurance departments and not every state collects data on cancellation notices.

3. Big Premium Increases.  We’ve seencountlessstories of people losing their insurance and finding big premiums hikes with new Obamacare-compliant plans.  As one Obama supporter put it, “Of course, I want people to have health care. I just didn’t realize I would be the one who was going to pay for it personally.”

4. Losing Insurance And Delaying Treatment or Incurring Big Medical Bills.  Some people who lost their insurance were unable to get coverage on the exchange due to glitches in getting the exchange that prevented getting the customers information to insurer.  Larry Basich ended up with a $407,000 bill for his heart surgery when the Nevada exchange couldn’t figure out which plan he’d signed up for.  Gary Smith experience similar problems with the Nevada exchange and as of January he no longer had coverage for his diabetes medicines.  These problems are not limited to Nevada.  See this story on Vermont, for example.

5. You Can’t Keep Your Doctor.  In order to pay the costs of covering ten “essential” health benefits and guaranteed issue and community rating as required by the exchanges, plans on the exchange have limited their networks of doctors and hospitals.  Sometimes known as skinny networks, many patients are not pleased as they’ve found that the exchange plans don’t cover their long-time physicians.  Take the case of 17-year-old Johanna Benthel, who has had 84 surgeries over her life due to congenital malformations in her brain.  Her mother, Eileen, said her family policy was cancelled last year.  Last year Johanna was treated in at a clinic at the University of Chicago.  Eileen says the new policy they have offers no coverage for going out of New York and they have lost coverage for one of their doctors.  For more stories of Obamacare hardships, go here.

6. Doctors.  Doctors have lost the ability to own a physician specialty hospital as Obamacare gave this “gift” to the big hospital lobby, like the American Hospital Association, to secure its support for the law. In the end, the ones likely to suffer the most are patients as they will lose the choice of what type of hospital they want to use and as physician-owned hospitals tend to have higher quality than traditional hospitals.

7. Your Subsidy—Now You See It, Now You Don’t.  NCPPR’s Amy Ridenour points to an article in the Philadelphia Inquirer that found the Federal exchange is using the wrong poverty guidelines, using those of 2014 when it should be using 2013.  That may be resulting in some people qualifying for subsidies (since the 2014 guidelines are a bit higher) when, in fact, they may not qualify.   This has happened before thanks to a glitch in the Washington State exchange.  It happened to Jessica Sanford, who had received a shout out from President Obama at one of his press conferences after she wrote him a thank you note saying the subsidy she received helped her afford insurance.  Oops!  After getting a letter telling her she was not eligible for a subsidy:

Now she says her dream of affordable health insurance has gone poof. She can’t afford it. She’ll have to go without. “I’m really terribly embarrassed,” she says. “It has completely turned around on me. I mean, completely.”

….About 8,000 Washington Health Benefit Exchange applicants will get smaller federal tax credits for their health insurance than originally anticipated because of computer problems on the federal and state health insurance websites.

8. Specialty Drugs.  If you need to take an expensive specialty drug and you are on the exchange, it won’t be cheap.  According to NewsOK:

To try to keep premiums low, some states are allowing insurers to charge patients a hefty share of the cost for expensive medications used to treat cancer, multiple sclerosis, rheumatoid arthritis and other life-altering chronic diseases.

Such “specialty drugs” can cost thousands of dollars a month, and in California, patients would pay up to 30 percent of the cost. For one widely used cancer drug, Gleevec, the patient could pay more than $2,000 for a month’s supply, says the Leukemia & Lymphoma Society.

As I noted in a blog post, the reason people who really need such drugs are getting the shaft is that they amount to a tiny political force.

9. Medical Device Manufacturers.  ObamaCare imposed a 2.3% tax on gross sales of the medical device industry.  Estimates vary, but some loss of jobs in the industry is likely.  Furthermore, from 2013-2020, the medical device industry will lose a cumulative $18 billion in investment because of the excise tax.  That’s $18 billion that won’t be going into the development of new technologies that could improve Americans’ health and maybe even save lives.

10. Employees Work Less Hours.  We don’t yet know the impact Obamacare’s employer mandate* will have on jobs as the mandate was suspended for 2014 and is suspended for businesses with 50-99 employees in 2015.  However, Jed Graham of Investor’s Business Dailyhas compiled a list of 401 employers who are saying they will reduce employee work hours so as to avoid the mandate.  *An employer with 50 or more full-time employees must provide the employees with health insurance or pay a fine.  A full-time employee is defined as working 30 or more hours a week.

11. Income Inequality.  When the Congressional Budget Office released an analysis showing that the incentives in Obamacare would reduce work hours by the equivalent of 2.5 million full-time jobs, Obamacare supporters tried to paint a happy face on it by saying it meant people could retire earlier or mom could spend more time at home with their kids.  Chances are most of the people affects will be low-income workers who now have a big incentive to avoid moving up the economic ladder (they’ll lose their Medicaid benefits or exchange subsidies as they make more income.)  Given that the Obama Administration was harping on income inequality shortly before the CBO released its report, the “happy talk” response seemed particularly dishonest.  After all, if Obamacare given many low-income workers less incentive to move up, what do you think that will do to income inequality?

12. Liberty.  From forcing people to buy insurance with the individual mandate to forcing them to buy insurance with benefits that they don’t want, personal freedom has taken a beating under this law.  The Supreme Court will soon decide if the government can force employers to provide insurance that includes abortifacients and birth control if it violates the employers’ religious beleifs.  Here’s hoping that the Court rules in favor of liberty this time.

13. Hospitals.  Hospitals may lose because they a receiving lower DSH payments and because of the “skinny networks” in the exchange plans.  On the other hand, they may benefit from the Medicaid expansion.  The jury is out.