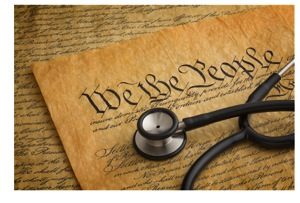 A few things leapt out at me as I read the transcript from today’s oral arguments in the U.S. Supreme Court in the consolidated Hobby Lobby/Conestoga Wood HHS contraceptive mandate case:

Multiple justices see this, in part, as an abortion case. The left has consistently pushed the theme that drugs and devices that stop a fertilized egg from implanting are not “abortion” and are not morally different from drugs and devices that prevent an egg and a sperm from joining. Based on today’s oral arguments, two of the many the left has yet to convince on this point are Chief Justice John Roberts and Justice Stephen Breyer.

Justice Sotomayor may be willing to throw the baby out with the bathwater. Justice Sotomayor pointed out that the federal government’s fine for not insuring the employees is less than the fine for insuring them without full coverage for all contraceptive/abortion drugs and devices covered by the HHS mandate (which, in my opinion, is curious) and probably less than the cost of insurance, so why doesn’t Hobby Hobby simply stop insuring its employees? (In response, Justice Roberts noted that employers may have a religious belief that they should provide insurance — a point Justice Kennedy called “important”; Clement and Justice Scalia observed that employers who do not provide insurance will have to raise wages to remain competitive.)

Someone wasn’t paying attention at the beginning. Justice Kagan was under the mistaken impression that Congress, not HHS, wrote the HHS mandate.

Some liberal justices were discomfited by the overwhelming support of Democrats for passage of the Religious Freedom Restoration Act. Justices Ginsburg and Kagan argued that the overwhelming popularity of RFRA among both Democrats and Republicans means it could not possibly have meant to cover the religious freedoms of for-profit institutions. Clement had a good answer here from the legislative history but I’ll add that it is a bit disingenuous of Ginsburg and Kagan claim a 2014 Democratic Party worldview for the Democratic Party of 1993. They must know better.

Being paid in cash, not contraception, is no hardship. It was taken for granted by both the Solicitor General and his counterpart that the taxpayers could reasonably buy contraceptives for people whose employers did not supply them. But since, as was noted by at least two justices, an employer not offering contraception coverage presumably will pay more in cash or other benefits to stay competitive, wouldn’t an employee who took contraception from the taxpayers be double-dipping? (But of course I realize the Court is debating constitutionality, not good public policy, and both men were arguing the same point for opposite reasons. Still.)

Sometimes, there’s no there there. The Solicitor General spent a lot of his time trying to prove a religious exemption for birth control creates a substantial burden on third parties.

Some things may exist that have a race but no conscience. Solicitor General Verrilli’s curious claim that a corporation can “have a race” and yet not exercise religious freedom seems contradictory.

Some points are stronger than others. Justice Kennedy’s observation that a federal agency, not the Congress, decided what the religious exemptions currently are for the HHS mandate is one we probably will hear mentioned again in June.

Some points are stronger still. The Solicitor General repeatedly told Chief Justice Roberts and Justice Kennedy that no law currently on the books requires a for-profit corporation to finance abortions. Too bad for him he and they both knew the real point: If the court adopts the Solicitor General’s position in these cases, some day there could be.