29 Mar 2014 How Can Senator Patty Murray Be So Ignorant about a Law She Voted For?

ConservativeBlog.org
Posted at 06:19h in Blog, Health by Amy Ridenour 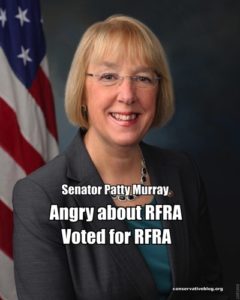 For a U.S. Senator who makes laws for the rest of us, Senator Patty Murray was stunningly ignorant in an interview with one of MSNBC’s resident feminists the other day, after being asked unbiasedly why she believes the HHS Mandate “should be left intact, for the women who need it.”

Murray quickly showed she does not understand the mandate, the Religious Freedom Restoration Act, or the way publicly-held corporations are run.

Susan Jones of CNSNews.com has the story (video at link):

“I’ve worked hard to make sure that women have access to the right kinds of health care, and it’s their choice, not their employer’s choice,” Sen. Patty Murray (D-Wash.) told MSNBC’s Andrea Mitchell on Tuesday.

“Sitting in that court today, it was stunning to me to recognize that nine people are going to make that decision — and will decide for a long time to come — whether women have to question when they go to work every day what the shareholders of that company’s religious views could be.”

…Murray said the “compelling” question for her is, “Should a private CEO of a corporation or their shareholders’ religious rights trump the right of employees?”

If the court rules that private companies have the religious right to deny contraception, could that be extended to immunizations? Murray asked. “It really opens up a wide, wide range of issues that shareholders could decide about what they provide,” she said.

“And secondly, the question really is: So do 51 percent of the shareholders get to vote that they don’t provide contraceptive coverage? I mean, the thresholds are very interesting here, and it’s going to be very difficult, I think, for this court to make those determinations on this case.”

#1 “The right of employees” – Employees do not have a “right” to birth control coverage paid for by employers, not even under the HHS Mandate, which excludes all males from comparable birth control and sterilization coverage made available to women. If “rights” really were involved here, the HHS Mandate would be unconstitutional, because it excludes roughly half the population.

#2 “Could that be extended to immunizations?” Not likely, Senator Murray. Under 1993’s Religious Freedom Restoration Act (RFRA), the federal government can restrict religious rights in any situation in which the federal government can demonstrate a compelling interest (which is likely to include immunizations), as long as it does so in the least restrictive way possible to meet its goals. That said, why don’t you know this already? You voted FOR RFRA!

#3: “Do 51 percent of the shareholders get to vote that they don’t provide contraceptive coverage?” No. Shareholders of publicly-held corporations have very little ability to make ordinary business decisions for corporations, despite being the owners. If a shareholder of a publicly-held corporation submitted a shareholder proposal mandating the content of employees’ health insurance benefits in any way, upon the request of the corporation, the Securities and Exchange Commission would throw it out without a vote. The absolute best a shareholder can hope for is passage of a non-binding advisory resolution telling management the opinion of shareholders, which management would be free to disregard. So no, Senator Murray, no employees (or, in the case of the HHS Mandate, employees of the favored gender) would ever have cause to go to work wondering if the shareholders were going to vote to change the terms of their compensation packages. RFRA or no RFRA, the shareholders do not have this power.

I understand that not every American has the time or energy to understand every key national issue in the public square, but there is no excuse for this level of ignorance among United States Senators. Not only do Senators have huge professional staffs to brief them, and no other professional responsibilities to speak of, but in this particular case, the Senator is complaining about a law for which she voted!