ConservativeBlog.org
Posted at 05:57h in Blog, Health by Amy Ridenour 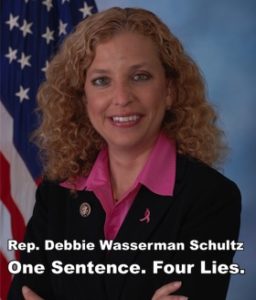 “When 99 percent of women used birth control in their lifetime and 60 percent use it for something other than family planning, it’s outrageous and I think the Supreme Court will suggest that their case is ridiculous.” – Rep. Debbie Wasserman Schultz on MSNBC’s The Ed Show, March 25

Debbie Wasserman Schultz may have gotten two Pinocchios from Washington Post “Fact Checker” Glenn Kessler Monday for that statement above, but she got off easy.

The 60 percent number is a big lie. The real number is 14 percent.

The 60 percent lie wasn’t even the first lie of the sentence. 99 percent of all women do not use birth control in their lifetime. In fact, by age 44, only 86.8 percent of women have ever had vaginal intercourse, even once.

Wasserman Schultz wanted the audience to believe a fourth lie. Wasserman Schultz wanted viewers to believe some people (religious conservatives, of course) are trying to block women’s access to routine health care. But nobody is. Even the Catholic Church, which famously objects to artificial birth control, does not object to women taking the pill for non-birth control purposes, and does not object to insurance policies covering the pill for non-contraceptive reasons.

It strains credibility to think Wasserman Schultz is, after years of debate in this topic, unaware that the vast majority of women who take the pill use it for birth control. It is very unlikely she truly believes 99 percent of all women use birth control at some time in their lives (are the lesbians using it too, or doesn’t Wasserman Schultz believe in the existence of lesbians? How about the devout Catholics? Women who like children? Women who marry late or never? Women who know they can’t get pregnant? And so forth.). And Wasserman Schultz has to know that a drug prescribed for something other than birth control does not fall under a birth control regulation, and two minutes on Google would show her that the Catholic Church does not object to the pill, or insurance coverage for same, for non-birth control purposes.

Kessler’s Pinocchios grading scale grades two Pinocchios for “significant omissions and/or exaggerations.” Kessler said Wasserman Schultz’s ten words (“60 percent use it for something other than family planning”) qualified as such.

I say Wasserman Schultz should be graded on her entire sentence: four lies. A “whopper” – four Pinocchios.