ConservativeBlog.org
Posted at 05:27h in Blog, Health by Amy Ridenour 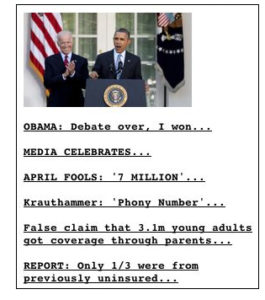 Congratulations to the National Center’s David Hogberg, whose work uncovering various pitfalls of ObamaCare has been read on the air twice by Rush Limbaugh and cited on the Drudge Report during the past week.

On Tuesday, Drudge linked to David Hogberg’s new paper putting the lie to President Obama’s claim that “more than 3 million young adults… have gained insurance under [ObamaCare] by staying on their family’s plan.”

Using data from the Census Bureau, David found strikingly different numbers than those reported by the President: only 258,000 young adults may have gained coverage due to the so-called “slacker mandate.”

Rush spent about 8 minutes discussing this on his show Wednesday.

On Friday, Rush discussed another part of David’s research, the ObamaCare signup deadlines and related issues.

For fans of Rush and/or David, here are Dittocam captures and transcripts, with links to the original reports.

Rush and Drudge aren’t the only media covering David’s work. In addition to numerous newspaper, magazine and Internet media citations, David has been a guest on a radio talk show 54 times during the first 90 days of this year.