ConservativeBlog.org
Posted at 05:10h in Blog, Health by David Hogberg

Reading Michael Hiltzik one almost feels embarrassed for the Los Angeles Times.  He’s an ObamaCare shill, and like most shills he’ll repeat an argument in favor of his cause no matter how ridiculous.  For example, here is how Hiltzik spun the disastrous opening of the ObamaCare exchange websites:

…the problems of the healthcare.gov website reduced enrollments, cutting the government’s bill for premium subsidies.

In that same post Hiltzik also repeated the canard that the lost work hours caused by ObamaCare—equivalent to 2.5 million jobs—was a good thing because grandma could retire earlier.

Another characteristic of shills is that they repeat any statistic that supports their cause without ever questioning the methodology behind the statistic.  Is Hiltzik that kind of shill?  Well, here is my twitter exchange with him when I pointed out that the methods behind the claim that 45,000 people die from lack of insurance annually in the U.S. were rubbish: 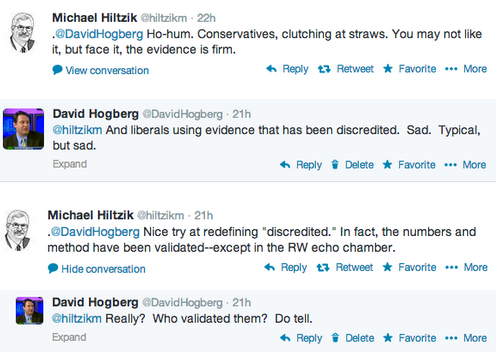 Hiltzik didn’t answer that last tweet because there is no answer.  For more on the methodology behind the 45,000 statistic and my further tweets with Hiltzik, see this post.

Well, Hiltzik is at it again this morning, parroting a new survey from the Urban Institute that purportedly shows that 5.4 million people who were uninsured now have coverage under ObamaCare.

First, it’s not clear if the survey distinguished between those who have signed up for coverage on the exchanges and those who have actually paid their first premium.  If it doesn’t, then it is overstating the number of newly insured.

Second, the Urban Institute uses the services of a firm call GfK to conduct the survey.  GfK uses its sampling method known as the “Knowledge Panel.”  However, the Knowledge Panel has some pretty serious bias in its samples that likely leads to an overstatement of the number of people who are newly insured.

When doing public opinion surveys, a researcher needs to get a sample that is as close an approximation as possible to the population he is surveying.  To do this, he needs to conduct a random sample.  Yet random sampling can be tricky, and it’s not hard to introduce bias (often inadvertently) into a sample.  If the sample is biased in some significant way, then the sample will yield inaccurate information about the population the researcher is trying to survey.

And the GfK’s Knowledge Panel introduces some substantial bias:

Sending people free computers and free internet service will bias the sample.  First, there are the hassles these people who get the free computers and internet service go through—such as giving out personal information so GfK can ship them the computers and, maybe, get the computers back eventually, going through the instructions with GfK staff to set up the computers, and then regularly respond to the survery.   The ones willing to go through that hassle are the ones most likely to see it as a reasonable cost for getting goods that they don’t have to pay for with cash.  Ultimately, GfK has oversampled people who are willing to go through the hassles of signing up on the ObamaCare exchanges if it means their premiums are subsidized or the hassles of signing up for Medicaid which usually doesn’t require the recipient to pay anything for care.

The bias inherent in the GfK Knowledge Panel is easier to see when the the Commonwealth Fund used it for a survey back in 2011.  The Commonwealth Fund claimed that survey showed that 6.6 million young people had gained coverage on their parents plan due to Obamacare’s requirement that insurers allow dependent children to stay on their parents’ plan until age 26.  6.6 million!?!?  Apparently that number was too far fetched for even the Obama Administration to use.

The survey had another finding that was a red flag for sampling bias.  According the Commonwealth Fund report,the “survey finds that nearly two of five (39%) young adults ages 19 to 29 were without health insurance for all or part of 2011.”  No other reputable survey has found a rate of uninsurance that high among that age group. For example, the Census Bureau shows that the worst rate of uninsurance in recent years for people in that age group was 29% in 2009 (see page 73 of the 2012 report).

What happened in this case is that if GfK is oversampling young people who would not get a computer unless someone else paid for it, it is also oversampling people who won’t get insurance unless someone else pays for it. (Computers and internet access aren’t that difficult to acquire—over half of poor households have computers and 43 percent have internet access.)

Given that, it seems that the Urban Institute is oversampling people who were previously uninsured and now have coverage.

But don’t expect Michael Hiltzik to concern himself with any of this.  He has his statistic that supports his precious ObamaCare.  And like a typical shill, he’ll simply dismiss anyone who challenges the statistic as part of the “Right Wing Echo Chamber.”