07 Apr 2014 More On The Bogus ‘3.1 Million Young Adults Have Gained Coverage Via Their Parents’ Statistic

ConservativeBlog.org
Posted at 08:12h in Blog, Health by David Hogberg

Last week NCPPR published my study debunking the claim that “3.1 million young adults gained coverage by staying on their parents’ insurance until 26 due to ObamaCare.”

The Administration had based that claim on 2011 quarterly data from the National Health Interview Survey.  I used the most up-to-date data (third quarter of 2012) to find that based on the NHIS survey the number of young adults getting insurance through their parents’ plan was about 2.2 million.

I’ve been trying to get even more recent data, but so far the NHIS has been unable to provide quarterly data.  NHIS has only released data that is an average of Q1-Q3 of 2013.  So, let’s update my analysis using that data, understanding that it’s not the same as the quarterly data:

Avik Roy of the Manhattan Institute notes some other problems with using the NHIS data beginning with this chart: 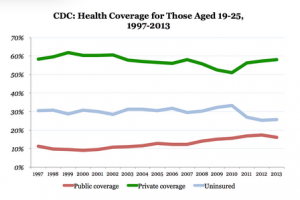 [HHS employee Benjamin Sommers who wrote the Administration’s analysis] assumes that the entirety of the growth in coverage is due to Obamacare. This is highly unlikely. As you can see from the [above] chart, if you look at the NHIS data over a longer period of time—say, from 1997 to 2013—there’s a big dip in the percentage of young adults with private coverage in 2009 and 2010, corresponding to the worst depths of the Great Recession.

Sommers cherry-picked the 2010 baseline that would make his comparisons as flattering as possible. He compared the third quarter of that year, when 49.8 percent had private coverage, with the fourth quarter of 2011, when 58.8 percent did. The full-year averages for 2010 and 2011 were 51.0 and 56.2 percent, respectively; for the first 9 months of 2013, the proportion with private coverage was 58.1 percent.

If you simply use 2008 as your baseline—before the effects of the recession—you still get a positive effect, but a much smaller one. In 2008, the proportion of young adults with private coverage was 55.8 percent; if you assume the entirety of the change in private coverage from 2008 to 2013 is due to Obamacare, you get a coverage expansion of between 869,000 (on a 2008 population base) and approximately 1.04 million (on a 2013 population base). That’s not nothing, but it’s 2 million less than what the Obama administration is claiming.

I say maybe 2.64 million, Roy says closer to 870,000.  I also noted in the study that Census Bureau data shows that number of young adults gaining coverage via their parents’ insurance is closer to 258,000.

In short, we have no clue how many young adults have gotten coverage this way, and the numbers flying around are too unreliable for the president or anyone else to be using.