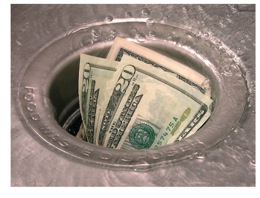 Specifically, why did the federal government spend $700,000 on a climate-change propaganda musical?

Worse, one put on by a theater group that advertises left-wing environmental organizations and their frequently-noxious causes on its website?

I don’t remember “funding musicals” as one of the Constitution’s enumerated powers. Maybe it’s there, but there just wasn’t room to print it in my pocket Constitution?

Michael Bastasch has the theater boondoggle story in the Daily Caller.

Just as most taxpayers pay for their own expression, so should politically-correct theater groups.

Taxpayers likewise should be relieved from funding advertising for groups that lobby for a carbon tax, sue local governments (which means taxpayers), fight against government approval of the Keystone pipeline, tell the media it is not biased enough toward the left, and promote “green energy” profiteers.

One of these groups, Al Gore’s climate something, even has a project to send its sheep out to argue with climate skeptics (whom they call “deniers,” because, name-calling).

Now as refreshing as it is to see one of the CAGW-believers willing to engage in debate (Al Gore remains too frightened, but he’ll send his followers into the battle of ideas unarmed, no problem), this project isn’t something that ever should be funded by the taxpayers.

Thomas Jefferson said, “…To compel a man to furnish contributions of money for the propagation of opinions which he disbelieves and abhors, is sinful and tyrannical; that even the forcing him to support this or that teacher of his own religious persuasion, is depriving him of the comfortable liberty of giving his contributions to the particular pastor whose morals he would make his pattern, and whose powers he feels most persuasive to righteousness…”

People who don’t believe in the secular religion of the church of global warming should not be forced to pay for its indulgences.