ConservativeBlog.org
Posted at 03:45h in Blog, Health by David Hogberg

Today I have an article in The Federalist titled “Why Obamacare’s Enrollment Triumph Will Prove Fleeting.”  In it a look at many of the same issues I did in yesterday’s blog post on Obama’s phony numbers.  But I expand it to include a look at the 8 million enrollment figure.  For example: 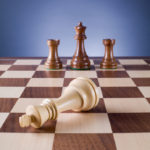 The white king is fallen.

If that occurs across all exchanges,then the final enrollment number will be closer to 4.6 million.  Of course, not every state is California (thank goodness), so the amount of churn due to Medicaid and employer-based coverage will vary across the nation.  Yet those factors will cause the eight million figure to be revised downward as the year goes on.

As a result the enrollment number will be revised downward over the coming months:

Each time that happens in the coming months, the media will hark back to the President’s victory dance.  For a public that doesn’t much trust Obama on health care, each revision will likely erode that trust a little further.  They will also provide his political opponents with more opportunities to claim Obamacare isn’t working as well as the President claimed.